March 27, 2012
For those who don't know, "Varsity" is the annual sports competition between Sheffield's two Universities - Hallam and Uni. The first ever Sheffield Varsity 10k took place on Sunday, starting at Don Valley Stadium, and for some reason I entered this rather than the Edale Skyline fell race. Not quite sure how that happened, but anyway... 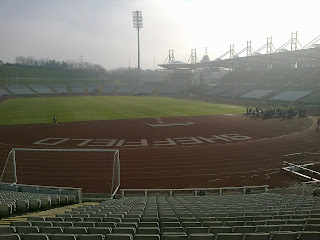 It was a very sunny day before the start, but cold in the shade. We were all given a race T-shirt at registration, but I wanted to race in my Big Alps Run vest to try and drum up some more interest! I didn't know what time to aim for, but after a chat in the pub with Wil and Lucy I decided to target 35 mins. I was happy with this until the day before, when I realised that this would require back-to-back 5k personal bests!

I didn't know how quick everyone else would be going, but set off in the lead group. There were four of us: A small man, a tall man with long hair, me and another man. Another guy made occasional sprints to the front, then faded and went backwards. After a while he stopped doing this and stayed somewhere behind the four of us. We stayed together for the first of three laps, then at the start of the second the small man and the long-haired man started to pull away a bit. They had maybe 50m at 5k, which I went through at 17:24 (PB by about a minute!). The second half of the race was tough and I felt like I had maybe pushed it too hard early on. The small man looked very comfortable and was pulling away a bit, the guy I had been close to had moved away and passed the tall man, and I was fourth.

Towards the end, a man in a luminous vest started catching me. I felt rubbish so thought he might get me, but I grunted and gurned my way back in to the stadium and held on for fourth, in a time of 35:24. I think I'm pretty happy with that. The winner (small man) did 34:15.

So... Varsity-wise, since Uni finished first, second, third, fourth and sixth in the mens, and every position except one from 1st to 11th in the ladies, one might expect that we won? Well no, apparently it's all about average times, which means we were beaten by 18 seconds! Unbelievable.