Showing posts from November, 2012
Show All

I have also just heard that the end of year party will be the end of Runfurther as we know it... Karen, Si and Mark will not be arranging or running (in the organisational sense rather than the foot propulsion sense) the series any more next year. I don't know who will but I hope and am sure they will do as good a job as these guys have. It's clearly a lot of work and the three of them have been very good to us over the years. My grand slam year - 2008 I would personally like to say a massive thank you to each of you for your work behind the scenes! Since I first ran one race in the series in 2007 I have learnt a lot about ultras, but have yet to have an easy one. Sharing these experiences with others through the series is great and makes the whole lot even more enjoyable. Karen seems to be at every single race I do, from ultras to Open 5s... And always with a massive smile, and usually more points than me if there is a map involved! Si has given me so much quiet en
3 comments
Read more 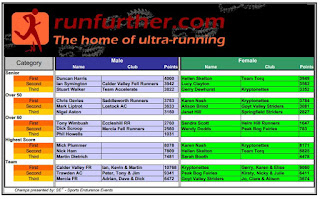 So, the 2012 Runfurther series has come to an end... It was an exciting finish - before the final race at Round Rotherham both Duncan Harris and Ian Symington had won three races. However, since Ian had completed four races to Duncan's 3, he was in the lead and Duncan had not qualified for a series finish. I was second in the series before Round Rotherham, but we all knew what was probably going to happen! And it did, Duncan won Rotherham in 6:29, Ian was second in 6:53. It was a risky strategy but it certainly worked for Duncan. Resulting in this... So, congratulations to Duncan, Helen, Nick for his 3rd Grand Slam, and everyone else on your achievements! I am very pleased with 3rd in the series, a few years ago I could not have imagined a season where I won a race and finished in the top three overall! It's been a great year and I've had some fantastic experiences. There is going to be a proper end-of-season party again this year, which I hope I can go to, so I'
Post a Comment
Read more
More posts