Showing posts from February, 2012
Show All

It's been a busy couple of weeks... Last weekend I was out recceing the High Peak Marathon with the guys from Avon Mountain Athletes, who I'm racing with on 3rd March. We had a great run out and found a couple of sneaky little routes, which might save us a few minutes come race day (night). The next day I was up at Whirlow Hall Farm to help with some photos and videos for the Big Running Weekend, which is happening this August Bank Holiday. There's going to be an ultra, a 10k, a trail race, beer and camping... What more could you ask for! The website will be up at www.bigrunningweekend.co.uk , with videos of me and Lisa from Whirlow Hall Farm trotting about on Stanage. This weekend I took part in the first official stair race in Sheffield. I was one of the runners in the British Heart Foundation Arts Tower race, which involved us running from the lower ground floor up to the top 22 floors later. I went for a practice on Friday and found that you need to take two steps
2 comments
Read more 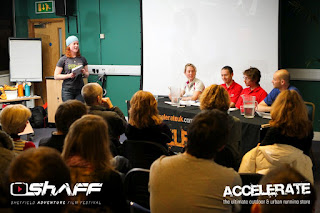 Thursday night was the ShAFF "Ultra Running and Beyond..." night. The event was basically a question and answer session, and 70 people turned up to ask us about anything from shoes and food to just "WHY?!". I am told that feedback has been good so I think people enjoyed the night. Hopefully some people were inspired to have a go at their first ultra! Picture from Accelerate (facebook page) - by James Kirby I was a panellist, alongside Caz Bullard, Dan Shrimpton and Nik Cook. Stuart Hale of Accelerate organised and introduced the night, and Claire Maxted of Trail Running Magazine was our compare. The boss of the whole ShAFF thing, Matt Heason, was also there. The event was supported by New Balance, many thanks to them for the very fancy Minimus shoes, can't wait to try them but I just don't want to get them dirty We talked about loads of things, and it was great for me to hear the opinions of the other panellists. I think I probably came across as the
Post a Comment
Read more 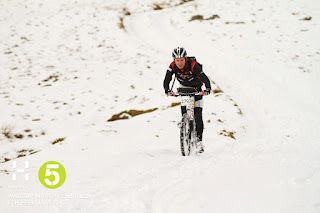 Sunday was my second Open 5 of the year. It went marginally better than the last one, ie. nothing went mechanically wrong! The event was based at the Warcop military training centre, a place which you can't normally access, so it was pretty cool to be there. Whilst out on the course I saw lots of old military hardware and blokes in camouflage hiding in the grass, and the odd crack of gunfire kept us on our toes! Picture from James Kirby / Open Adventure The snow had arrived, as predicted, at 2pm on Saturday. By the time Lucy Harris and I arrived at the hostel in Kirby Stephen it was about -3, and certainly felt like it remained so throughout the night in the Team Accelerate bedroom! Sunday was sunny, with a little fog on the tops, and snow high up. The course had been designed so that you could get a fair few points without going too high, but I think most people did anyway. I set off on the bike first, and went west for a reasonably successful loop through CPs 4, 3, 1, 2, out
Post a Comment
Read more
More posts