February 07, 2012
Sunday was my second Open 5 of the year. It went marginally better than the last one, ie. nothing went mechanically wrong! The event was based at the Warcop military training centre, a place which you can't normally access, so it was pretty cool to be there. Whilst out on the course I saw lots of old military hardware and blokes in camouflage hiding in the grass, and the odd crack of gunfire kept us on our toes!

The snow had arrived, as predicted, at 2pm on Saturday. By the time Lucy Harris and I arrived at the hostel in Kirby Stephen it was about -3, and certainly felt like it remained so throughout the night in the Team Accelerate bedroom! Sunday was sunny, with a little fog on the tops, and snow high up. The course had been designed so that you could get a fair few points without going too high, but I think most people did anyway. I set off on the bike first, and went west for a reasonably successful loop through CPs 4, 3, 1, 2, out and back to 5, then 6 where I met Lucy Harris and Adam Marcinowicz for a while. Then we set off up the hill towards Long Fell and CP20. The climb was hard and long but good fun. After the checkpoint near the top I was still with Adam, and we headed up to the top, then east to CP16. So far so good. This descent is where the picture above was taken, in a rare moment of control! 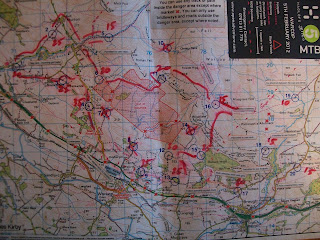 Then, we tried to head for CP19. This is where things started to go wrong, with hindsight we should definitely have turned south at CP16. We lost about half an hour not finding the paths across the top before giving up and cutting across to CP15. I was now eating into my run time, but decided to get the high-pointers near the finish (12, 13, 9). I headed into transition after about 3 hours 35, with 290 points.

On the run, I set off west to pick up CPs 27, 29, 30 and 33. I got these without too much trouble, although my legs did take a while to get going properly. I then headed up to 39, losing maybe 5-10 minutes on the way up as I climbed the wrong hill (Middle Plantation), but thankfully realised before it was too late and cut back across. From there I knew it would be tough, a long climb up to Musgrave Scarth and CP38. I managed to run the whole climb and felt good at the top! I have marked the map wrong at this point, I actually climbed straight up to 36, then back down to 37. I was debating cutting straight across from 38 to 37, but although I was short of time, thought I would probably mess up the nav so headed up... From 36 I really had to step it up a gear and try to get back in time in order not to lose any of my 150 run points. It was always going to be hard, and despite throwing myself down the gap through the out of bounds area as fast as I could I finished about six minutes late, losing 12 points. I finished with 440, so ended up with 428. Having set off at the same time as me, Adam took a much more sensible run route, stayed slightly lower, got loads more points, and was back in time. 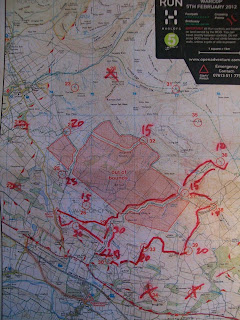 The problem I have with this type of event is that I just can't navigate well enough to be running or biking as fast as possible, so whilst on long climbs or sections between controls I can crack on a bit, I get passed again by all those people who can read a map! Congratulations to the rest of Team Accelerate - Dan was 2nd male solo, Dave and Nick 2nd male pair, and Lucy took her second female solo win... Looking good for the series now!