January 24, 2017
After a successful and beautiful early-morning 3 hour outing last weekend without much more than a little niggle of the adductor pain I've been struggling with for a month or so, I decided to up the ante this weekend.

One of the many fantastic things about Dark Peak Fell Runners is the wealth of experience in the club, so when you fancy a hilly 30-ish mile route to make your Sunday more interesting, a quick visit to the DPFR facebook page or website will give you a few options. I decided on the "Kinder Killer", a route invented by K Jones and currently marketed by Ian Winterburn. The idea is similar to another classic route, the Kinder Dozen, involving a zig-zaggy loop of Kinder Scout, alternately visiting the plateau and the surrounding valleys. There are seven climbs as opposed to the (obvs) 12 of the Dozen, but the Killer route is different and I think slightly longer overall. Ian also suggested that it's a nicer route, so I took his advice and plotted the Killer on my map.

Sunday's weather looked pretty good and I hoped to get cracking early-ish in order to be back for at least some of the day at home. Sadly, due to a flat van battery and then losing the bolt which holds the battery cover, it was after 9 by I left home. Further faff ensued when I remembered I'd need £5 in coins for the Edale car park, which seemed tricky to arrange despite visiting multiple shops and garages. Though one failed cashback attempt did result in three bottles of beer waiting for me in the van later in the evening - not a complete disaster! Anyway, what I'm trying to say is that it was nearly 11 by I left Edale, meaning running darkness was certainly probable and probably inevitable. My emergency torch was looking small and weak...

So, off I went, leaving the Nag's head towards Grindsbrook Clough and the first ascent. It was cold, I carried a thin down jacket as an emergency layer and although I didn't need it I wore everything else. The snow was falling as I climbed up towards the plateau and continued to do so above 400m for most of the day. I was surprised to see so many people walking up the first climb up Grindsbrook Clough, but all seemed to be enjoying themselves. I was actually amazed at the number of people out walking all day, the conditions weren't great (not even as winter conditions - a bit grey!) but only on the northern section did I feel much solitude. After the climb I bimbled my way around to the Druid Stone, which I can never find properly. I eventually did and headed off down Lady Booth to the Youth Hostel. Another minor detour down their drive before I realised I wanted to contour round the moor and I was on my way to the second climb...

I won't describe the ins and outs of every up and down, because that would be boring, but at risk of them becoming huge tracked out motorways when the hoardes of people who read my blog head over there (yeah, right) I will mention a couple of them. First, Blackden Clough, which is a beautiful little valley with a babbling brook trickling over moss-covered rocks. I've never been up there before but I will certainly be back. I also enjoyed the climb from just above the A57 up Fair Brook, particularly the scrambling at the top! This was actually a feature of many of the climbs and I think adds a lot to the route. Finally, the climb up to Kinder Downfall was pretty spectacular. After the downfall I only had two climbs left and it was starting to get a little dark, but the frozen waterfall looming in front was a memorable sight! I am slightly ashamed at this rubbish photo, but it's the best I could manage... Trust me, it was spectacular.

The climbing of the downfall was another matter though. The ice made the rocks a bit dangerous and I had to climb a long way round. What would normally be lovely grippy gritstone became icy rocks of death and I lost quite a while messing about here. Not that it really mattered, but I was a little worried about the light. After eventually making the top of the downfall I pressed on to the Kinderlow trig, then dropped down to Kinderlow end, then steeply down via Jacob's Ladder where I saw other people for the final time. The penultimate climb up to Crowden Tower was short and steep. I could feel the 2000m of climb in my legs now but I was still moving reasonably well and jogged a bit when the angle lessened near the top. The worst part of this climb was finding a beer bottle half way up! I picked it up and carried it home to recycle, but how it got there I don't really know!

At Crowden Tower I turned my torch on and headed downwards in its slightly pathetic little puddle of light, eventually reaching the final turnaround near Broadlee Bank Tor. The climb up Grindslow Knoll is mercifully short and after the steep first section not really too bad. I hit the top in about 7 hours 10, and 15 minutes later was back at the Nags Head.

Kinder Killer is a cracking route, with lots of interesting scrambling and visits to places you might not normally go. I'd heartily recommend it. I clocked it at 46km and 2800m of ascent and it took me 7:23. To be honest, it's a good bit longer than I'd wanted to be, but that's not the point at the moment. 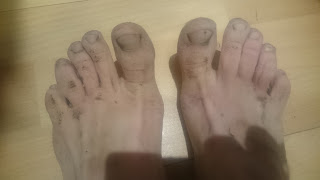 Thanks Ian Winterburn for the route advice, and K Jones for inventing it!

P.S. I don't know who K Jones is, but I don't think it's superspeedy Fell runner and orienteer Kris Jones.