Showing posts from October, 2010
Show All

Last weekend was the end of season party for the UK Ultrarunning championships, so we were all at the Traveller's Rest pub near Hope for some running, food and a few beers on saturday night and some mountain biking on sunday (for me, a lesson in what real mountain bikers look like from Karen and Andy)! We also had a great talk from Stephen Pyke (Spyke) on his incredible Munro's record. This summer Spyke ran over Scotland's 283 3000ft peaks in just 39 days 9 hours and 6 minutes, beating the previous record by nearly ten days. The talk and slideshow Spyke gave us was brilliant, with lots of pictures of the less than ideal weather! (Spyke here in the Munros, but on another trip) Spyke's own blog from the trip has great descriptions from each day, and also the opportunity to sponsor him in his fundraising efforts for the John Muir Trust. The blog is here... http://munros2010.blogspot.com/
Post a Comment
Read more

October 21, 2010
Ahead of our end of year party this weekend, the final results of the Runfurther UK Ultra series have been published. Congratulations to Jon Morgan of Dark Peak Fell Runners, who won three races and set at least one new course record on his way to overall victory. I finished 13th, with 3402 points to Jon's 3985. My four "counters" were the Manx Mountain Marathon (33 miles - 10th), Pumlumon Challenge (26 miles - 9th), Calderdale Hike (37 miles - 6th) and the Lakeland 100 (102 miles - 10th). I really enjoyed all the races, and I think the standard has jumped up this year. Really looking forward to next year - top ten here I come! (Hopefully)
Post a Comment
Read more 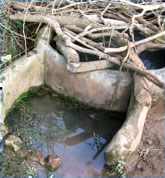 As I said, I gave a quick talk at Water for Kids (WfK) day in Manchester on Saturday. It was great to see the work that the charity does, and to see what the money donated from the British Isles Challenge was used for. One of the main things the charity does is to secure water sources in rural African communities, and for a village or around 1000 people this costs around the same amount I was able to donate. Here's an example of the great work they do, showing a village water supply in Uganda before and after work of WfK. I'm hoping to raise much more from the Big Alps Run, so hopefully WfK will be able to do loads more good work. I've also done some route planning in the last few days, and pretty much sorted the section from Zermatt to Nice, the last quarter or so. From Zermatt to Chamonix I'll be roughly following the Haute Route, then from Chamonix south through Tignes, Modane and towards Nice on the GR5 route (a long distance walking route which I'll be usi
Post a Comment
Read more
More posts