Showing posts from February, 2016
Show All

Being vaguely sensible for once. 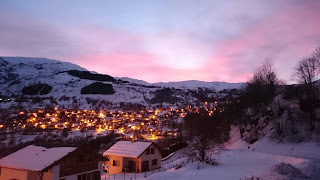 There are a few reasons for this post... Firstly, it's been ages - though looking at most running blogs, most posts start with the immortal words "It's been a while since I've written anything", so that's maybe not a surprise! Secondly, I'm feeling slightly smug today after a great run out in the mountains around the Belleville valley. The reason I'm smug is that I, for once, was slightly sensible and turned back when the conditions told me to, rather than getting into the sort of situation I described  here . Must be getting old. As I've mentioned, Lorna and I are currently running a ski chalet in the Belleville valley. It's a fantastic place to live and work, but it is sometimes hard work and the days are often long, with running and skiing stuck in wherever possible. Thursday, however, is our day off, so inevitably this has become my "long run" day. A normal Thursday begins with a mental battle between taking the opportunity for
Post a Comment
Read more 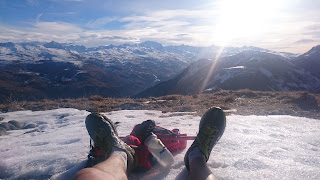 I've been living here in La Combe, in the Trois Vallees in the French alps, since November. To be honest, in skiing terms, it's been (so far) a horrible season - there has really not been very much snow! Things that should've been white since December are still green, the locals are grumpy, and the Marmots are confused. Amazing for running, crap for skiing However, I've been having a brilliant time! Yes, it's fair to say I haven't become the skier I hoped I might, but I've managed to keep running a lot more than I thought I might, and have started doing some ski touring. Which brings me to the point of this little post... Ski touring is an awesome sport. It reminds me of a combination of running in the high mountains and road biking. For the unfamiliar, ski touring involves the use of skis with "skins" on the bottom, which grip one way and stick the other, allowing you to push them uphill. In combination with lightweight boots with a
Post a Comment
Read more
More posts