Showing posts from April, 2013
Show All

On Saturday at 7am I was back in a familiar place: Trying to get a bit more sleep on a coach from Threshfield to Ingleton. I didn't sleep but eventually we arrived at the start of the Fellsman, ready for another year's 62 mile slog across the Dales. The start field (borrowed from  Guy Mawson ) At precisely a couple of minutes past 9 we were off, heading out through the village (there were even a few spectators!) and onto the ascent of Inglebrough. It soon became apparent that Kim Collinson had a plan - he went out fast and soon had a decent lead on a group of four behind, made up of Konrad Rawlik, Adam Perry and Ian Phillips who I had teamed up with for this event, and myself. We ran at a good pace, I think probably slightly quicker than I would've done had Kim not been out in front. It didn't quite feel comfortable and couldn't seem to get into a good rhythm, it didn't help that I kept tripping myself up on the rocks! After a very slippery descent of In
Post a Comment
Read more 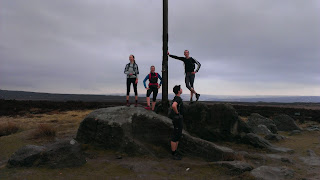 Last night I had a great run out to Hathersage with Wil, Lucy, Joe and Zanthe. We were joined by some other ShUOC guys at the pub for dinner, I was brave and did not give in to the lure of the Cumberland sausage. My bravery was rewarded, they took a long time to come but the ribs were fantastic! The team at Stanage Pole on our way out to Hathersage Today I knew that, according to the schedule, I would be doing 3 hours of running at 8 minute miles. After a bit of breakfast I started thinking about where to run... It seemed I had run along the edge path from Crosspool out to Lodge Moor every day for the last month (not quite, but I do run it very often!) and though its a great route I fancied something different. Then I remembered the Dark Peak Loxley 5 Trigs... A 22ish mile route around Loxley, which links 5 trigs together. Tom Westgate and Willy Kitchen had told me about it at the Winter Mondays and it sounded like a great little route. The rules state that you can start anywhe
Post a Comment
Read more 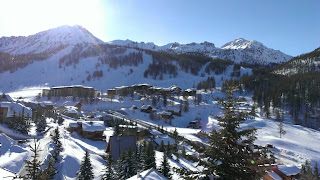 I can't believe it's already April! We've had some good snow here in Sheffield this year, which in part has got me thinking about colder adventures... It's also about 10 months since I started the Big Alps Run, and the itch to do something big and exciting is back. A couple of weeks ago I had a fantastic week with my wife and family skiing in Montgenevre. We were hosted by Ski Etoile  and despite the lateness the snow was fantastic! Since returning I have been feeling the mountain withdrawal symptons and have decided it's time I did some Ski touring, if not this season (though maybe, just!) then certainly next, so I've spent a little bit of eBay money and nearly have a beginners setup ready for action... Can't wait! Montgenevre from Chalet Eskimo Running-wise, I'm moving on from Haworth and have started some serious training, coach has got me doing hill reps on Lose Hill! I did the first session a couple of days ago and it's actually quite goo
3 comments
Read more
More posts