February 11, 2012
Thursday night was the ShAFF "Ultra Running and Beyond..." night. The event was basically a question and answer session, and 70 people turned up to ask us about anything from shoes and food to just "WHY?!". I am told that feedback has been good so I think people enjoyed the night. Hopefully some people were inspired to have a go at their first ultra!

I was a panellist, alongside Caz Bullard, Dan Shrimpton and Nik Cook. Stuart Hale of Accelerate organised and introduced the night, and Claire Maxted of Trail Running Magazine was our compare. The boss of the whole ShAFF thing, Matt Heason, was also there. The event was supported by New Balance, many thanks to them for the very fancy Minimus shoes, can't wait to try them but I just don't want to get them dirty

We talked about loads of things, and it was great for me to hear the opinions of the other panellists. I think I probably came across as the most un-scientific of the four of us in terms of things like nutrition and training plans, and perhaps I will try some of the suggestions from the other guys.

The only disappointing thing was that I didn't promote the Big Alps Run as much as I would've liked. I had hoped that the night could be the "launch" of BAR, but I now think I will do this on 14th February, which will be exactly three months before I start.

The Peak District was beautiful today, but very icy! Not a problem for the paragliders though, they seemed to be having a fantastic time. We took the dog for a walk around Stanage Edge then I had a good run along the edge path past Lodge Moor and Crosspool. 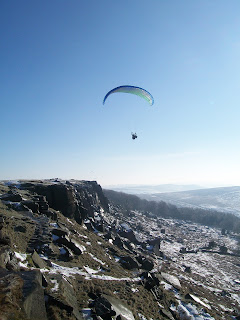