November 15, 2012
I have also just heard that the end of year party will be the end of Runfurther as we know it... Karen, Si and Mark will not be arranging or running (in the organisational sense rather than the foot propulsion sense) the series any more next year. I don't know who will but I hope and am sure they will do as good a job as these guys have. It's clearly a lot of work and the three of them have been very good to us over the years.

I would personally like to say a massive thank you to each of you for your work behind the scenes! Since I first ran one race in the series in 2007 I have learnt a lot about ultras, but have yet to have an easy one. Sharing these experiences with others through the series is great and makes the whole lot even more enjoyable. 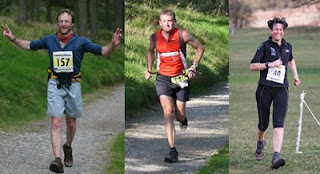 Karen seems to be at every single race I do, from ultras to Open 5s... And always with a massive smile, and usually more points than me if there is a map involved! Si has given me so much quiet encouragement over the last few years and is a fantastic person to have a beer with, if the rest of us think running hurts we could learn a lot from this man! Mark is someone I have always looked up to as a runner. I've managed to beat him a couple of times now, but records like 11 Fellsman wins and the Lake district 24 hour record are still achievements I (and everyone else) can only dream of.

So without wishing to sound too much like its a funeral, thank you three for the last 5 or so years, it's been brilliant! You have been a big part of a big part of my life :)