A night on the bog

March 06, 2012
Despite being about 3 hours from anywhere remotely Avon-esque, on Friday I joined the Avon Mountain Athletes to compete in the High Peak Marathon for the second time. This was slightly more organised than last time (when I joined the team at the last minute), and we had even managed to get together for a recce a couple of weeks ago. After finishing second to Flipper's Gang last year, we were keen to try harder this year and see if we could catch the blighters...


As well as Flipper and friends, this year's entry list looked very strong, with the likes of Kim Collison and Dan Shrimpton (Crazy Diamonds), Kevin and Adam Perry in Young and Old, and plenty of others. We watched all these teams set off before us, hoping we would see them again as the night wore on. At 11:47 we set off, with only Flipper's Gang left in the hall.
As we expected, they caught up the minute and made a point of passing us on the first climb, although slightly after Hollins Cross this year. We abused them as they passed us then settled into the long night ahead, gradually catching teams as we moved on over Lose Hill and Win Hill, and onto the first big checkpoint at Moscar. Here we passed another few teams by only stopping to grab a jam sandwich and top up our water bottles, and pressed on down the road, where we saw Run MDC with Gary Davies (who I raced with at APEX) and Tom Gibbs (Adventure Racing royalty!). 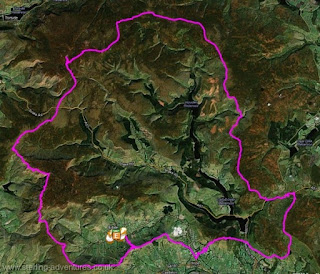 I always struggle to remember the night-time sections of races, and not a lot sticks in my mind from this one, except some really boggy sections (it was quite damp this year) and both Tim Laney and myself having some stomach trouble. This didn't really slow us down too much though. Once we got towards the final third of the race we started asking checkpointers how many teams were ahead of us, and were told most times "about 6 or 7". This was a bit disappointing as last year we had been second "on the road" by this point. However we knew that some teams would be giving us up to half an hour, so we may well be higher up than this. Through the night we saw the High Peak Rollerbladers A LOT! We set off a minute behind them, and were pretty well matched. They were moving a little faster, but our route choice was a little better, and I'm sure they passed us at least 10 times.
As the saturday morning sun rose the fog and generally uninspiring weather continued, but we were still moving well. Martin's well recce-d route around Brown Knoll caught us another position and I thought we might be around 5th. We had hoped to target a sub-9 time, but the conditions had not allowed this. As always seems to happen with races finishing in Edale, the last section involved running through that horrible slurry-strewn farmyard (and there were cows... Argh!) then along some knee-bashing road to the village hall. We arrived back in 9:32, and found out later that this was good enough for 3rd place.
It would've been nice to do better than last year, but I guess a podium is good, and we were much closer to Flipper this time (24 mins vs. 53). It's an odd race this one, but I do actually enjoy it. I believe the same team are pencilled in for next year, and hopefully we can win in 2013... We might have to up our game though, some of the "new" teams from this year will be jolly fast once they know the way!
Now - rest, recover, train and taper in a week, it's nearly Wuthering Hike time!
What happened to some other teams...
- High Peak Rollerbladers - 2nd. 7 mins in front of us. 1st mixed.
- Crazy Diamonds - 5th. Some nav issues, they will be fast next year. Very please to beat Kim and Dan!
- Young and Old - 11th. Got a bit lost. We saw them at Swains Head, but then it all went wrong.
- Run MDC - 10th. Seemed to have enjoyed themselves!
- Accelerate - 13th. 5th Mixed team. Had a low point in the middle but finished strongly.