March 20, 2012
Last Thursday I was invited to attend the second University of Sheffield Elite Sports Performance Scheme awards night. Those of us on the scheme were asked to attend in "national kit", so I put my short shorts and race top on, and headed down to the Union... To discover that most people had not taken it quite so literally. Luckily I also took a pair of jeans so all was well. 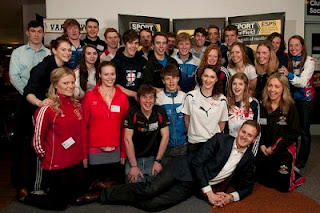 We had some photos taken as a group, with the commercial partners of the scheme (who support some of the students), and with one of the scheme patrons - BBC sports presenter Dan Walker. The other patron is a certain Ms. Ennis and Dan was very gracious and gave a really good speech.

Overall it was a great night! I'm not particularly good at "networking" so might not have helped the scheme raise more money from commercial donors, but I did enjoy chatting to some nice people.