February 16, 2014
Last week I returned to a place I have spent many a happy day... Samoens in the French Alps. If you don't know it, Samoens is a little (though growing!) village close to the town of Taninges, and the city of Cluses, just over the Col de Joux Plane from Morzine. From the village there is a lift which takes you up into the Grand Massif ski area, and I have skied there with my family for the last few years. It's a great place to ski from, but also a proper village with a square, bars and a really good proper Savoyard restaurant. I also spent a night there on the Big Alps Run, so for all these reasons it has a special place in my heart.

This year I am planning to have a go at a new type of racing, so during my time in Samoens I also hoped to have my first proper go at it: Ski Mountaineering. Well, my first training days were a lot more like very tame Ski Touring, but the basic principle is the same... So I spent most mornings taking the lifts up and skiing down like most other people, and the afternoons skinning up the side of runs, then practicing taking the skins off, packing them away and heading back downhill! I had a few good training sessions and though I am by no means experienced, I'm now looking forward to my first Skimo races - in Scotland next weekend. I am well aware that I've committed to jumping in at the deep end and I expect to finish last, but I'm looking forward to the experience and hope I can learn a lot from it. The snow conditions in Scotland look great so far too!

One day we woke up to heavy rain so I decided to give skiing a miss and headed off for a run. I often get out for a run or two while skiing but this was one of the best snowy runs I've had. I ran alongside the river Giffre from Samoens to Sixt, then up through tiny villages and hamlets, then through forest to finally emerge at the Lac de Gers. The rain had turned to snow and the little mountain hut was open! I had a coke, turned around and ran back down. A good 1000m ascent / descent, but the best bit of the run was seeing an Ibex really close up on the way, he watched me for quite a while before deciding to head back up to the top of his hill.

Since returning to the UK I've been busy with normal work and boring stuff, but two really exciting things have happened: Firstly I gave a talk to Sheffield Riverdale 41 club about the Big Alps Run. 41 club is a club for former members of Round Table (who have to leave at age 40, hence 41 club) and they were a great audience. I was given dinner two which was brilliant! My coach Stu Hale also attended, and was amazed to see me wearing a tie! I can't remember the last time I did so, so here is the moment recorded for posterity: 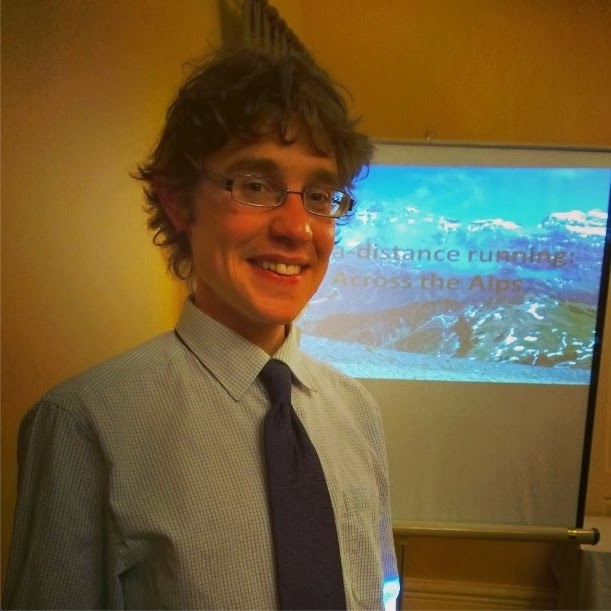 The other exciting thing is the arrival of a new member of our family, albeit a temporary one. We're helping Labrador Welfare with one of their dogs, so Acer will be living with us for a while, hopefully until he can walk on the lead nicely and find a permanent home! He's 9 years old but has the energy and excitement of a puppy, we've already had lots of good walks and I reckon he can be a runner yet!

So that's all for now, watch this space to hear about how Skimo Scotland goes next weekend!