January 11, 2013
I used to have a sticker on my ski helmet which read "Crash and learn"... I wonder if what happened yesterday will teach me anything?

I went out to do an hour on the road bike, it was about half past three by I got going to I put the lights on and set off from Crookes, through Crosspool towards Rivelin Dams. Then up Roper Hill to Ringinglow and west, past Burbage Bridge, down The Dale to Hathersage. Just before I descended to Hathersage I stopped for a quick photo of the cloud inversion in the valley.

In Hathersage I turned left, up out of the village and back up the other way to Burbage Bridge. From there it was basically downhill to Ringinglow then all the way home. Good ride so far! It was getting dark now so I had the lights on, but as I came down past Lady Canning's plantation I remember noticing the slight sparkling on the tarmac. By the time I'd realised what this meant I was still doing about 50km/h when I noticed the patch of ice in front of me, which I hadn't seen on the way up. Half a second later I was on the floor, sliding along on my left side, with my foot still clipped in. 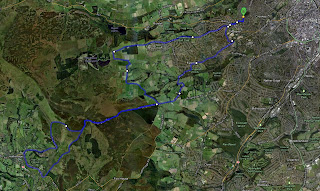 I remember coming to a stop and thinking I needed to get off the road. I saw a car coming behind me and was very grateful that I hadn't been 30 seconds later. I dusted myself off, picked up bottles from across the road, checked everything was working and decided just to get home as quickly as possible. The bike looked a bit battered, both levers were bent inwards, but actually it was OK and I was able to ride home. Unfortunately doing so meant I got very cold and by the time I got back it was dark and I was shivering. I was pretty lucky really, my left leg is quite bruised but the grazes aren't too big or deep. And you're spared photos of the best one as it's on my bum...

So, what have I learnt?
- Just because it's not icy at home doesn't mean it's not icy in the Peak
- Take gear with you for the ride that might happen, not only for the one you plan
- If it's icy, go mountain biking instead!

Nothing I didn't know, but a good reminder...