December 01, 2012
It's only Saturday night, but it has been a busy weekend already!

On Friday evening I did a second recce of a Peak District route I am hoping to have a go at this winter... I parked the van near the Strines Inn and planned to use my daily commuter BMX to take me back five miles or so to the crossing of the A57... Unfortunately within about half a mile the chain snapped, so with the bike chained to a fence I set off on foot earlier than predicted...
Anyway, from the A57 I had a good run up to Rod Moor, across to the Emlin trig point, then as it started to get dark on a direct line from there to Back Tor. The sunset over Back Tor was spectacular. From there a quick descent took me back to the Strines and off home.
Last night I was very lucky to be invited by the University Elite Sport Performance Scheme to "An Evening with Jessica Ennis" at Sheffield City Hall. The event was for the benefit of three charities - TASTE (who do some fantastic work, similar to Water for Kids who I have supported previously), the ESPS itself, and Sheffield Children's Hospital, an amazing place who have helped so many children, and continue to do so.

The evening was really interesting, Jessica and her coach Tony Minichiello were interviewed by the BBC's Dan Walker (who apparently is something to do with football normally), and we saw lots of footage from the Olympics. There was also music by Reverend and the Makers, who were fantastic! I guess a seated audience is not their favourite to play to but the music made the night even better. Unfortunately the photos I took have come out spectacularly badly, but here are a couple anyway...
And a huge thank you to ESPS for allowing me to attend such an inspirational evening!

Finally (for now), I have spend today at a new race, the "Pain Barrier". It's organised by two Dark Peak runners, but rather than a fell race its a tough, muddy 10k. This type of race is becoming very popular now, and there were over 500 entries today! My legs were a bit battered after yesterday but I stood maybe two or three rows back on the startline, hoping to start steadily and work my way through the field. 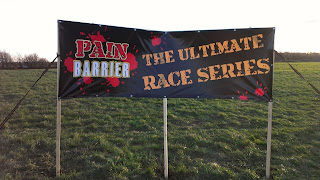 After quite a lot of shouting "PAAAAAIN" which was a bit wierd, and cheering, we were off... The first two rows were an interesting mixture of people - guys built like boxers without shirts, skinny road runners in shiny shoes, and the odd fell runner-type. We ran across a field and then joined a track into the main part of the course, a big wooded area (the venue was a 4x4 centre, so lots of muddy, wet, rutted tracks... and a fair bit of ice on the rocky sections!). I had moved past a few people and was now around 10th or so. The first track was good running, but it gradually got muddier and the tracks a bit more rutted. I nipped past a few more people up the first steep climb and after another couple of km I was in a leading group with Rob Little (who was running non-competitively, and I'm not sure even really trying too hard!), a guy called Tod, and another guy from Ilkley.

A bit after half way we reached the pond we had been warned about... it was a lake! There was a rope across it and the top was still mostly a sheet of ice when we got there... I ran onto the ice, thought it was holding, then slipped backwards and crashed through it with my bum. It was tough as there was no grip on the bottom, so the rope was your only hope!

The four of us ran together for quite a lot of the race, which continued to be wet and tough, but at around 7km something went wrong... Tod had slipped away in front so the three of us were together when we realised a certain amount of deja-vous was occuring... We had been here before! To cut a long story short, due to some barrier tape having been blown away we had done an extra loop, and when we ran in to the finish it turned out (I think) three guys had finished in front of us. Not the end of the world, it was a good fun race, but I guess I'm a bit disappointed not to have finished where I could have.

Mainly though it was abundantly obvious to me today that Rob and Tod could probably have left the rest of us for dead if they had been competing properly! In short races like these I am still a long way behind these guys...

* - apologies to SportSunday that I can't buy every photo you take of me, I do buy them after big events. If you would like me to remove the links above please let me know.