December 11, 2012
Last week was a great, with a few changes which could have a big impact on my running life...

I have been accepted onto the University of Sheffield Elite Sport Performance Scheme again, which means I have the continued support of the University and access to the gym etc. The awards night on Wednesday was great, we were presented with our certificates by Sheffield Olympians Dave Wetheral and Kieran O'Malley, and the special "Jessica Ennis Scholarship" was awarded to Jazmin Sawyers (who I have just discovered shares my birthday! As does Mark Cavendish), by none other than Tony Minichiello. It was an inspirational evening, though as ever I was crap at 'networking' and stood by myself a lot...

The next big thing to happen this week was the acquisition of a Dark Peak Fell Runners hoodie, with the ESPS one that's two this week - sorted for winter! 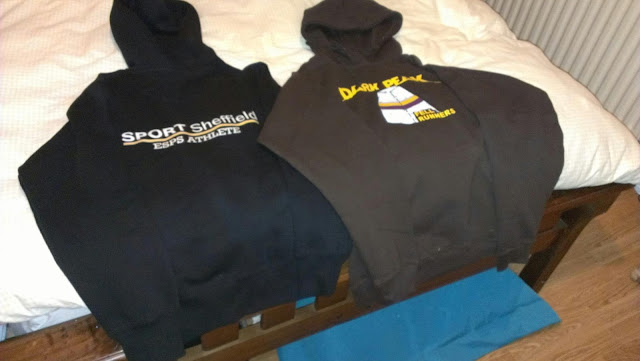 Fast forward to Saturday and I now have a coach, we've identified my major weaknesses and a plan to solve them. But there's no substitute for long days out in the hills. On Saturday I set off round Edale Skyline, planning a fast couple of hours to catch up with Jon Steele (on ultra 50 of 52 this year... Incredible!) then join him for the remainder.

It was a beautiful day and I really enjoyed the run from Hope, Lose hill, Mam Tor and Brown Knoll. Just after I caught Jon and his mate Dave up and we continued through ankle deep (more in places!) snow till we eventually returned to Hope and I headed home. It was a great day out, four and a half hours in total and a good mix of pace. I think coach approved!

Saturday night was the annual Runfurther awards night. As I've already talked about Mark, Karen and Si handing over I won't go on about that too much, but it did feel like the end of an era... It was a great night though, there weren't hundreds of people there but we all ate, drank and were relatively merry! I gave a disjointed rambling talk about the alps (no change there) and we were then introduced to the new man in charge of runfurther... Mark Barnes. Jon Steele is also helping run the series, so it's in good hands. I spent a while chatting to Mark and have offered any help I can give.

After that we moved onto the presentation of awards and I was given my 3rd in the series prize. It felt great to be on the "podium", but I'm already slightly disappointed and intend to improve on third. Ian Symington wasn't there, but Duncan Harris was and accepted his first prize after winning four races outright... Great effort Duncan, well done!

Finally, on Sunday Lorna and I had a run around Damflask Reservoir, then I ran home. Thinking I'd cut across the valleys rather than around resulted in some very wet and muddy shoes, and tired legs! Still, nice to be out. Finally, last night (Monday) I ran my fourth race in Nicky Spinks' "Winter Mondays" series. I felt slow and tired but managed to come past everyone again, despite a few scary icy sections!