December 21, 2018
Apparently last year I wrote a long rambling "review of the year" type thing... I'm a bit disappointed in myself for doing that, so massive soz to any of you who may have read it. I feel I should close the year with some sort of blog though, so I am going to write something. It's called "Lots of hills and no hills at all", and it's about two bits of running I did recently.

Before I start, I would like to point out a couple of blogs vastly more worthy of your time. The first is Runners against Rubbish, a wonderful little charity aiming to... OK it's me again. But the posts are shorter.

The second is a genuine recommendation - Callum Rowlinson. I don't really know Callum, I beat him once and he has subsequently beaten me many more times, but his blog is great. It's mostly about dogs and slightly about running (which he mostly does fast). I enjoy it a lot: https://callumrowlinson.wordpress.com/

Last Friday I had a day off, so decided I would have another go at the Kinder Dozen. At the DPFR end of year doo I spoke to Willy about this plan and he generously offered to let me buy him a pint in exchange for some advice on which of my lines needed the most improvement. My own unique take on organisation meant that I never got round to actioning this, so when I set off on Friday it was with optimism rather than information.


But I'm sure you know about the Kinder Dozen by now... A loop from Edale with 12 ascents to the Kinder plateau, generally from about 300ish to 600ish metres. It's about 36km and 3500m of climb in total. Being lazy I set of at about 11. In contrast to previous attempts this time things mostly went well. I seemed to be able to climb OK, and despite a few wibbly lines (particularly off the first two tops - Grindslow and Crowden) I had finished six of the climbs in less than 3 hours. My fastest dozen is about 5 and a quarter hours, so 6 hours seemed a decent winter target. At half way it was on!

Fittingly for a winter dozen, the sixth climb to Fairbrook Naze saw the wind and rain which had been on and off give way to some proper facepain hail. I would've taken a photo, but have learned the hard way that it's best just to enjoy such conditions rather than getting your phone out. Until then I had been debating whether I could really get away with calling this a winter attempt, but at this point decided it probably was. By the ninth ascent I was pretty tired but still going OK. The descent between Kinder East and Crookstone Knoll is always hard work as the bottom part of the descent and climb are the same way, which poses obvious "why the hell am I doing this?"type questions. At top 9 I was still on schedule and there are a couple of easier ones after this, particularly stumpy little Nether Moor which is only 442m! After ticking this off and visiting the Druid Stone, I only had to find my way to the very TOP of Ringing Roger (I have been known to miss it) via a sloppy climb up the brook (cheers Mr. Supertrac), then descend to Edale. It actually all went pretty smoothly and I was soon skipping down the zigzags into Edale to finish in just under 5:49. 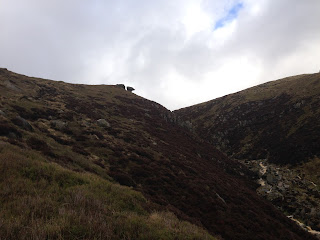 A major benefit of winter running is that you can leave dairy products in vehicles all day, so I enjoyed my milkshake and headed home. Maybe that sub-5 summer round is possible one day!


No hills - An accidental Florentine marathon

I sometimes wonder if I should run a proper marathon. I think probably not, but I do enjoy following people who decide to commit to it and target a time (such as Robbie Britton's great sub-2:30 story and run). None of this was in my mind when I set off on my tempo run on Sunday morning. I'm lucky to be out in Florence for another week, working at the fluid dynamics lab in the University, so my run was along the River Arno.

I set off a bit grumpy at this, because basically I'd forgotten the map which would have allowed me a lovely run in the hills instead... But maybe the flat would do me some good. In the hills on a long easy run I normally reckon 10 or 11km/hr is OK, but on the flat I realised after half an hour I'd done 7km. 7x2=14km... =3 hour marathon! So I decided I'd give it a go.

To cut a long story short, it didn't quite work. I was at 14km in an hour, 28km in two hours, but the pace slipped in the final hour and at 3:00 I had done 41km (42km came in about 3:06 as I fumbled around the city looking for the right Piazza!). My route was flat and riverine, following the Arno in one direction for about 5km, then turning around and returning to, and through (error) the city, before following Arnie the Arno in the other direction for 14km, ending up in a little Gypsy camp, slipping over and getting a muddy bum, then running back for not quite far enough, and back through the city (error) to make up the distance.

Still, it was a lovely run and I am pretty happy with a 3:06 marathon given I didn't know it was a marathon when I started, or have any food or drink. If I do ever do a proper one I will make sure I have three crossiants and two coffees before I start, which is a good lesson. 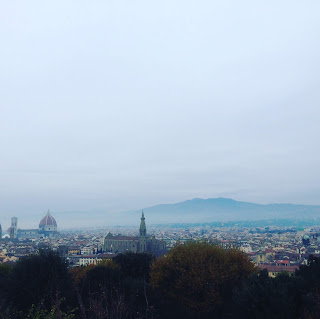 The End.
Well, that was better than a round-up of 2018 wasn't it! I will round up the not-a-round-up by saying thanks as ever to the people who keep me running... Stu Hale, Accelerate, and Scott. I still have no idea why you do it but I'm eternally grateful that you do. 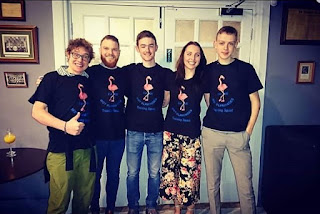