August 25, 2018
I think I have written before about how I don't have a "killer instinct" when it comes to racing. If the guy in front has a good gap I'll most likely finish second. Of course, if he has overdone it in the early stages and slows down I might pass him (assuming I haven't done the same!), but times when I have lurked behind someone then chased them down to overtake are in the minority.

Alex Hinchcliffe and I were recently talking about people whose results contain a disproportionate number of wins by short margins, i.e. close or sprint finishes. This seems to be the sign of a real racer, someone who simply cannot accept losing and is able to dig deeper in the final stages to make sure they win. Sadly this is not me, so if I want to win races perhaps my best chance is to get away and hide out of sight at the front.

This is sort of what happened at this year's Long Tour of Bradwell. I have had mixed results at this race in the past (getting lost twice and winning once), but I do love it. It's still my favourite local long race. As you might imagine, it starts from Bradwell. The route takes in Cavedale, Castleton and Edale on its way up onto Kinder, then around to Win Hill and Hope, then Stanage, Burbage, Padley Gorge and a final climb from Hathersage up onto Bradwell Edge before descending back to the village. It's 33 miles (54km) in total with about 2100m ascent. 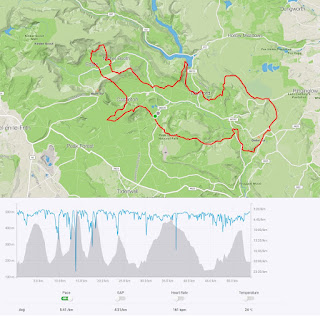 This year there were two changes to the previous route: The route on Kinder had been changed and would miss the climb up to the Druid Stone but to add an extra climb on Rowland Cote Moor, and the Padley Gorge route was much simpler, heading straight down the main track. I was delighted when I heard about these changes, both areas have flumoxed me in the past so the changes might suit me...

After a quick briefing from Richard Patton we started at 9am. It was a pleasantly warm morning and after the disappointment of not being able to attend the Matterhorn Ultraks race and a fairly last minute decision to race Bradwell, it felt good to finally be racing something! I had recognised a few people at the start, including Lee Kemp and Matty Brenan, but it turned out these guys were running the half tour, so I was amongst unknown runners as we ran out of the start field and off down the bridleway through the cement works.


After 500m or so I found myself at the front and decided I should see if I could get a bit of a gap. This worked sufficiently to be out of sight by the time we hit the climb up to Dirtlow Rake, so I continued the effort to Cavedale. I love Cavedale, whether going up or down, but I don't always run it as well as I'd like to think! It was slippery and I felt like I was going slowly, but I was enjoying myself as I dropped into Castleton for the first manned checkpoint. The marshals were great, I grabbed a Jaffa Cake and headed out of the village up Hollowford Road.

I ran the climb until the last few metres up to Hollins Cross, touched the cairn and dropped off the other side, down through the farm to cross the Edale road. I felt good, it was still a nice day and I was running pretty well. I also thought I had a decent gap, but looking back as I passed under the railway I realised that it wasn't actually very big at all - I could see a guy in a white top running along maybe 100 or 200 metres behind me. Shit! My mood plumeted and all the premature thoughts of victory disappeared, but I was still in front and the still legs felt OK, so I could push again and see if I could get away. Unfortunately the checkpoint dibber didn't work properly at Edale so I don't know what the gap was there, but at CP3 at Rowland Cote Moor (after 1:20ish) the gap to Rory Harris was just under 5 minutes. At the top of Lose Hill the gap was 8 minutes or so, 12 at Win Hill, and it hovered around the 10 minute mark for the rest of the race... But of course I knew none of this! On longer hills I looked back and didn't think I could see anyone, but I was never 100% sure.

This highlights one of the major advantages of being the type of runner we mentioned at the start - writing an interesting blog is MUCH easier if you've had a close race! I basically plodded as quickly as I could around the rest of the course and ended up finishing first. The Peak District was as beautiful as ever: A few highlights for me were meeting some of the half tour runners on Back Tor and Lose Hill, including a chat about my shoes with the friendliest man in the world, the new (for me) route around Bamford Clough and the long climb up to Stanage which I always think feels like a perfectly runnable climb - steep enough to feel like you've achieved something, but shallow enough that you can run it in a long race.

One low point was the run along the top of Stanage Edge. I normally love the uneven rocky ground, it requires full concentration to run quickly and smoothly, but today it felt very tough. My quads were angry!

Another low was the descent through Padley Gorge. I was pleased with the new route which meant I didn't get lost and spend hours wandering around as I have done previously, but the legs were angry again and every high step over a root or rock made my quads scream! By the time I got to the Hathersage checkpoint I was feeling good again, I ate my last gel and enjoyed the climb up the road. The paths through Abney Clough always frighten me as there seem to be so many little ones that could result in navigational disaster, but with great relief I reached the control in the bottom and was on my way to the finish. The last section was hard (as it always is, because by the time you're on the last section it's supposed to hurt, so if it doesn't, you just run faster till it does), but I knew that after the little gap in the gate on the top of Bradwell Edge it's downhill to home!

I passed a mountain biker having an argument with her bike on the way down the steep descent and concluded I was having a better day than they were, so with renewed perspective and positivity I started to believe and even managed a grin as I dropped into the village. After all, it was a race, we'd nearly finished and I had not yet been overtaken!

Fortunately this position continued to the final flat run in through the village to the finish. I saw Lorna and Buddy the (new) dog on the road, they were taking photos so I tried to run as coach has taught me....

Just before the finish I saw a face I recognised walking up the pavement having finished the half tour - it was Runfurther co-founder and now cycling superstar and local resident Karen McDonald! I'll try to be a minute quicker next year and catch you at the end Karen!

I ran into the finish, dibbed my dibber, and collapsed to the ground like a professional footballer (without the football skills). The organisers were fantastic and brought me a drink and later some food. The organisation, marshalling and catering really is top notch at this race, and it's all nice and locally beneficial. You should do this race, it's good.

Thanks again to thee organisers and marshals, and to Scott and Accelerate for the awesome kit (I wore the Supertrac Ultra RC, I reviewed them a few weeks ago if you're interested), and Stu Hale for coaching me. I should point out that the sunglasses are not a Scott item, they came with a bottle of Ice Tea once.
2018 DPFR killer instinct Mam Tor Peak District Racing winning