November 20, 2017
Right then, a food review... This blog is branching out! Well, slightly... the food in question is a new running / cycling snack called a "Lucho Dillitos". 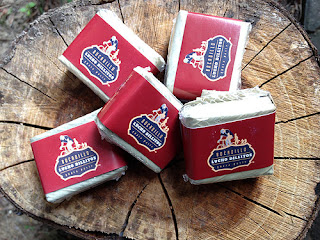 Lucho whatcha?
First things first, I'll save you the Google translation. Lucho Dillitos is Spanish for "I fight little boys" (try it!) This is surely a strong start.

Ingredients
As you are no doubt aware, energy food has changed over the last few years. Gloopy gels assembled in a laboratory from 57 unpronouncable ingredients have their place, but the discerning runist or cycler now looks for the shortest ingredients list and the most natural products. Here the little boy fighter scores well again. He contains only two things: 85% fruit and 15% sugar.

Energy
But, with all that health in him, how much energy will he give you? The Lucho contains 88kcal and 22.5g carbs. For comparison, a Nature Valley bar I found in the cupboard contains 143kcal but only 12.9g carbs (and a heck of a lot more ingredients), and a High5 Banana gel gives you 90kcal and 23g carbs. So, the Lucho Dillitos could pretty much be a straight swap for your gels.

Rubbish
As you might be aware, I bloody love rubbish. So much so I started a charity to stop people dropping it and encourage people to pick it up. We pick up gel wrappers (and their smaller, even more frustrating tops) waaaaay too often, so anything that can reduce the amount of these left around is a winner with me. This is million dollar baby's party piece - he's wrapped in a leaf... a fully disposable, biodegradable, chuck-in-a-hedge-able, leaf! This is a great feature, though if you're planning to eat it and chuck the wrapper, be aware that they do come with two layers of non-biodegradable packaging to work through at home before you get to the leaf.

For me this slightly ruins the idea. If you're going for a run/ride and you know you're going to have the Guava urge then you can get rid of the plastic and take a Lucho Dillitos out just in it's leaf, but then it's not going to keep long if you don't eat it. An alternative is just to take it out in all it's wrappers and bring 'em all home (and to be honest, if you can it's probably best to bring the leaf home and compost or bin it anyway), but doing this sort of cancels out the special feature...

Taste
However, if it tasted amazing, that wouldn't matter anyway! This is where it gets a bit personal, but I loved it. It's actually compressed Guava paste rather than a slab of fruit, so it has a dense granular texture to it. It's pretty sweet, but I enjoyed eating it. I'd definitely rather eat one of these than a gel in most situations.

So your honour, in conclusion:
+ Tastes great, natural ingredients, biodegradable packaging
- Lots of other packaging

I would heartily recommend trying one of these, if the flavour (and I understand two new flavours are on the way) is for you I think they are a great alternative to a gel. If you're very keen and want to know more, have a look at the Lucho Dillitos website. Unfortunately, it seems to suggest that they are named after a Colombian cyclist called Lucho Herrera, and have nothing to do with fighting little boys...