"a fantastic event - the organisers were fantastic, the marshals were really friendly and the course marking (apart from the places it had unfortunately been moved) really good. As David says, the route is a bit of a classic!

I had a great day, it felt really good to be back racing again"

This year was likely to be a bit different... I hadn't really felt much like racing since the Snowdonia Trail Marathon, but when Dave offered me a place I thought it sounded like a nice low key re-introduction to racing. That is until it transpired that a certain Mr. Scotney would be racing too! 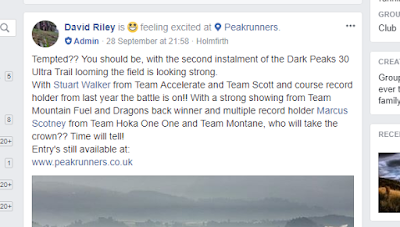 With Marcus running, as well as Matty Brennen, it was going to be a tough race! In the weeks before the race there was a lot of discussion about whether Marcus or I would win... I found this a bit scary - we weren't going to be the only people in the race and knowing my luck I could well get lost and finish way down the field! Even if it was to be between the two of us, Marcus is clearly a great runner.

I had a good period of training leading up to the race, including a really fun 5 and a half hour recce of the full course. On the morning of the race I had the same breakfast as last year (Peanut Butter and Banana sandwich) and put on my new Scott RC kit. At the start I caught up with Dave and Amanda, and chatted to Matty and Marcus, who played down his fitness... "still recovering from the Dragon's Back"... Suuuuuure.

Anyway, off we went. The route was slightly different this year, mainly in that it started in a different place! From Hope we'd run up Win Hill, down and up Derwent Edge, over Stanage, down and around Ladybower (not back up and over Win Hill this time), up to Crookstone Knoll and along the edge of Kinder, then down to Edale, up Mam Tor and along the ridge via Hollins Cross and Lose Hill before descending into Hope to finish.

I set off with Marcus, and within a minute or two we noticed we already had quite a lead. I had imagined that we would set off quite fast and see who slowed down first, but as we started up Win Hill the pace was quicker than I was ready for...

By the time we reached Simon marshalling at the top Marcus had a decent lead, but on the descent of Parkin Clough I caught him up and we started the climb up New Road together. On the way up I really dropped off, and as we went through the big down and up section I measured a gap of about 3 minutes. When I got to the big open section I looked back as far as I could but couldn't see anyone. I was working hard but hadn't given up and pushed on the climb up to Stanage. I saw Lorna on the way up and she later admitted that I looked in pain!

After Moscar I made a slight route error and missed the path climbing up towards Whinstone Lee, but quickly realised my mistake and turned back for it. Dan Stowers was at the top and took some great photos:


In all honesty, not a lot interesting happened from this point on... I had last seen Marcus as I passed High Neb, after that I was concentrating on the wet muddy descent down to Moscar, then there were things in the way, and then he was just too far in front! I didn't see anyone behind me all the way round, though if I had been able to, it would've been Matty.

If we look at a very clever little Strava thing I've just found, we can see how the gap between Marcus and I grew over the race...

As I was worried it might, the gap jumped up a bit along the flat section along the edge of Ladybower, but between Crookstone Knoll and the end only grew by a couple of minutes. However, the damage was done early on and despite pulling back little bits of time here and there over the Mam Tor ridge, the battle was lost!

Despite finishing one place down on last year, I'm pretty happy with my run. Marcus is a fantastic runner, and it was always going to be a tall order to beat him. 15 minutes is a big gap, but over that distance it's really just a tiny bit faster here and there (and a fair bit faster on the flat section).

The 2017 Peakrunner Dark Peak 30 was just as good as the 2016 version, and I would heartily recommend it to anyone looking for a tough and beautiful race in the Peak! David and Amanda do a fantastic job organising these races, and they deserve your support.

So that's all for now... Congratulations Marcus and Majka, thanks again Peakrunners, and as ever thank you Accelerate and Scott for your support!
2nd Dark Peak Enjoying Losing Peakrunner Racing Ultra