September 20, 2017
It's almost the end of September. The days are getting noticably shorter, temperatures have dropped a little, and if like me you live in a University city, the pavements have suddenly got busy again. Although I don't formally teach, working at a University means that summer is the easiest time to take holidays, and also the time when conferences and events tend to be organised. This means that August and September can be busy months!

In the last couple of weeks I've been on two notable trips, the first a work trip to Cork and the second a holiday to the Ardeche region of France. I won't bore you with all the details, but I wanted to talk quickly about the major summits of each trip... Carrauntoohil and Mont Ventoux.

Carrauntoohil is the biggest hill in Ireland. At 1038m it's higher than Scafell Pike, not quite as tall as Snowdon, and 300m or so shorter than Ben Nevis. It is bigger than the two remaining high points in the British Isles (Slieve Donard in N. Ireland at 850m and Snaefell on the Isle of Man, 610m). 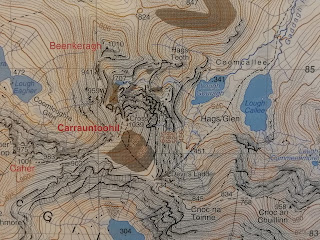 I had a very interesting week at the European Wave and Tidal Energy Conference, though an oversight on my part made the bike travel to and from my campsite much harder than it needed to be... Quite why I took two packed rucksacks rather than my panniers I will never know! But anyway, at the end of the week I had a spare day, so jumped on the train and headed west to Killarney. This is a lovely little place, and was about as close to the hill as I could find a campsite. I arrived quite late in the day, but pitched up quickly and jumped on my bike to ride out 20km or so to the hill.

It was a beautiful evening as I set off from Cronin's Yard. I had not been sure what to expect, but as I climbed the Hag's Glen and "Devils Ladder" route I was surprised by the size of the Macgillycuddy's Reeks range - it looks a fantastic place to run and I hope I get the chance to go back! The run up Carrantoohil was great fun, the track climbed steadily up the glen then steeply up the rocky section (the Devil's Ladder bit) to a col not far below the summit. I got to the top in just over an hour and had a quick chat with the only other person I'd seen since the bottom. He recommended nipping over to the other side of the col (up to another summit - Caher I think) then down a zigzag route to rejoin the glen. I took some photos then headed off the way he'd recommended. 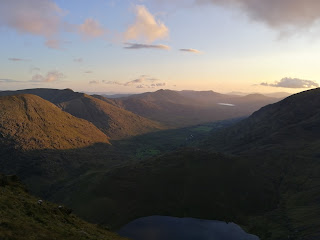 The descent was great and despite the photos and faffing I was back to my bike in just under two hours. The ride home was also lovely, as was the takeaway pizza in Killarney! 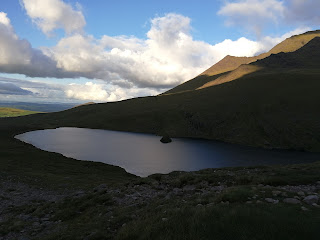 A couple of weeks later we had a cracking holiday in the Ardeche, including finally paddling the famous descent of the stunning Ardeche river with Lorna. Towards the end I decided Mont Ventoux was too close not to go for a ride. I had hoped there might be time for this and had, before leaving home, very quickly plotted a Google maps route from Vallon Pont d'Arc to the summit and back. I then used the excellent converter at www.gpsvisualizer.com to load it onto my GPS.

I was very lucky to be able to borrow a bike and helmet, and left Vallon at about 9 (I had planned to go earlier but was distracted by pastries). The route was beautiful from start to finish, as every route around here seems to be...

I climbed from Vallon to Saint-Remeze, then descended to the Rhone. This section was flattish and involved some big roads around Bourg-Saint-Andeol, but I rode mostly on small quiet roads. As I cruised along eating a ham and cheese crossiant all was well in the world. Somewhere in this section I noticed the fallability of my Google route planning... or more a case of operator error. I had forgotten to select the "roads only" box, so in sections where it was shorter my route tried to take me up 4x4 tracks. On someone else's bike I thought this was a bit rude so stuck to the road. This didn't present any more of a problem until a bit later...

I had started the climb and was excited - I was riding up Mont Ventoux! The road was still lovely and small, and as I climbed it was in fact getting smaller... Then it stopped. I had ridden through Les Alazards, then continued up towards Mont Serin, without realising that there is no actual road between the two! This was a bit frustrating as it meant I'd probably be late for dinner (Pizza again actually), but there was nothing for it but to turn around and head back to Malaucene and climb again.

This time I wondered how I'd missed the main route up the hill the first time, but soon forgot this as I started calculating how long it would take me to climb 21km at between 8% and 14% gradient! About 2 hours I reckoned, which was about right. The climb felt hard work. It was hot and the 100km already in my legs made themselves known. I did enjoy it though, more and more as I ticked the kilometers off, and as I passed a few people too!

With about 2km to go I was passed by a tall skinny chap who was flying - then we both came round a corner and saw the first open view of the masts at the summit. We both stopped for a photo, before he shot off again and I continued with the final few metres of grind.

A lot of people ride up the Ventoux every day, so many that photographers station themselves near the top to take your photo! They then give you a card so you can look up and buy your photo online later. I was chuffed to reach the summit and treated myself to a coke, a sticker, and some overpriced Nougat to take back for everyone at home. Once I'd taken a few photos and sorted out the coke-induced stomach cramps I set off down the other side of the hill.

This time I was descending the famous side of Ventoux down to Bedoin village - this is the side that the Tour de France climbs most often, and the site of the Tom Simpson memorial which I had a quick stop at. The famous Ventoux moonscape is something to behold, it's hard to describe until you've seen it but it is incredibly impressive. I was really lucky to have a clear warm day and loved flying down the hill without needing a jacket or anything. I descended much better than I normally do and even passed a couple of motorbikes!

The ride back felt like a long way. Thanks to the Google maps incident I would now be riding about 240km rather than the 200 I'd expected, but it didn't matter anymore. I had given up on the GPS and had a list of villages written on my hand, which I mentally ticked off as I passed them, and tried to work out if I'd make it back for 8 o'clock or not.

At Bourg St Andeol it didn't look likely, I had 29km to ride and only about an hour. The route of the last section was that of the 2016 TdF time trial, and it's an amazing route! The climb out of Bourg St Andeol is relatively short and is followed by a long section of undulating riding, with hills that wouldn't feel like hills at the start of a ride! After that it's down hill for 8km into Vallon.

After 240km and 3600m of climb I arrived back in Vallon stinking, sweaty, elated, and just in time for Pizza.

Thanks Coz for lending me your bike :-)