July 29, 2017
To borrow the words of a fine sportsman of appropriate nationality...

So here, in contrast to 2015, is a blog about this year's Snowdonia trail marathon.

The Scott Snowdonia Trail Marathon is a marathon (obviously, although the distance has in the past not always been exactly marathon distance!), starting from Llanberis and visiting Rhyd Ddu, Beddgelert, Nant Gwynant and Pen y Pass before climbing to nearly the top of Snowdon by the Pyg track, then descending on the Llanberis path.

I ran the inaugural race in 2015 but missed the race in 2016. Both previous years have experienced very wet weather, so it was a pleasant surprise to see some sunshine on the start line this year.

After a surprisingly comfortable night in the back of the Volvo I had some breakfast, registered and collected my number. then caught up with some friends. Pete Down and his gel-donkey (aka Chris Shelton) seemed to be having a lovely time and were excited to be running the half marathon. As we assembled for the start I had a quick chat with Dave Riley and Ben Bridley, then made my way towards the front. I spotted a few people I knew would be quick: Charlie Sharpe, Jo Meek, and Callum Rowlinson, who was 2nd in 2015 and 2016. Then we were off!

There were a lot of spectators in Llanberis, and as we ran out from the start I tried to remember what had happened in 2015 and not to go off too fast!


Callum set a superfast pace as we ran out of Llanberis and up the first gradual climb. I sat in behind him and another guy for a while, then realised that even this was too fast and dropped back a little further, until I found myself running with Steve Franklin. Steve is a strong runner in the Peak district and can frequently be found at the front of short fell races. I wasn't feeling good so after a quick chat with Steve I slowed again, and even had a little walk, then hovered around 8th position or so.

After the first climb came a very wet and slippery descent. The race route was marked really well by tape and flags, but this bit through the marshy stuff was slightly tricky to follow and required a good bit of concentration. Myself and another guy (who later turned out to be from a nice Frenchman from Chamonix) had a good time slipping our way through this section, but as we moved onto the flatter section afterwards he started to pull away. By the time I ran through Beddgelert at about 17km Charlie Sharpe had also passed me. We had a quick chat and I explained I was having a bit of a tough day. Charlie kindly offered me a gel, but food wasn't the problem, I just felt rubbish. Charlie said he was taking it easy today due to a big race next weekend, but even so he soon pressed on, running really smoothly on the flat trails through the forest. 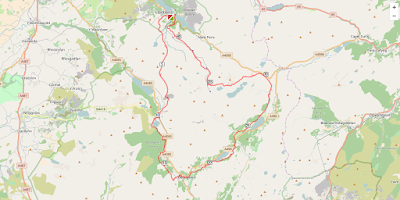 Along the edge of Lyn Dinas I tried to forget about racing. I was having a bad day and couldn't seem to get into a nice rhythm on the flatter sections, or not at a decent pace anyway! I felt like I was just wandering along, but the sun was shining and I was beginning to remember how stunning Snowdonia is, so maybe I could forget about racing and try to just enjoy myself. The hill was coming soon anyway...

At the Pen y Pass checkpoint I grabbed another quarter of Orange (a nice feature of the checkpoints on this race, along with gels and really friendly staff!) and set off up the Pyg track.

I felt like I climbed reasonably well (Strava seems to agree, with only Callum going faster) and passed the French guy and Charlie on the lower slopes. As I got higher up I saw occasional glimpses of someone else up in front of me, but in among all the walkers he was hard to pick out.I hit the top (36km done) in just under 3 and a half hours and turned around to head down the Llanberis path to the finish.

After the brief boost of feeling OK on the climb, running down felt even more rubbish than running on the flat had earlier! I felt wooden and stiff, and the rocky track was horrible to run down. I'm aware that this is in danger of sounding like a whingy blog post so I'll point out that I did enjoy seeing and saying well done to half marathon runners on the way down the hill, and once below 800m or so the spectacular views returned, so it wasn't really that bad!

Anyway, after the long painful descent I was in Llanberis village. Fortunately, the marathon runs directly to the finishline (whereas the half climbs back up through the quarries before its final run to the line). From the summit at 3:30 I had hoped I might make the finish in under four hours, or at least try to beat my 2015 time of 4:04:04. The final section seemed to make a meal of the run into Llanberis with lots of twists and turns through little bits of forest, but I eventually crossed the line in 4:05:13 for 6th place.

I am pleased to say that after two years of finishing second, Callum won the race in a new record time of 3:52. Steve Franklin was an excellent second place, and Jo Meek won the ladies race in 4:10.

So that's that. Another great Scott Snowdonia Trail Marathon, not quite as successful as 2015, but that's the way it goes sometimes. All we can do is try to find out what went wrong, try to get better, and focus on the positives! One major positive was my new Kinabalus, which contrary to my own advice I wore straight out of the box. No blisters, no problems, and enough grip to keep me upright all day! 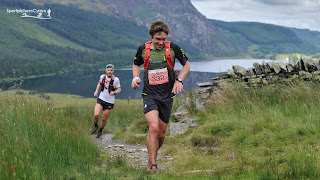 Next year there's an Ultra too... Since my photo appears to have been claimed by the organisers for use on all promotion I guess I'd better enter! Thanks as ever to the race organisers and checkpointers, and as always I am very grateful to Accelerate and Scott for sponsoring me, and to Stu Hale for coaching me.