May 15, 2017
On Saturday 6th May, an audacious attempt to make sporting history took place. Some people didn't like it, saying it was all just a big publicity stunt. Others admired the technical advances and the precise data capture.

Willy had arranged a series of start times based on predicted speed. The first started at 8am, then at half hour intervals till 10 o'clock, then billy-no-mates on my own at 10:15. Billy-no-mates suits me, but the navigation on the dozen is not easy and I'd have to concentrate in order not to mess it up. Records are sketchy, but the consensus seemed to be that the previous fastest time was around 5:20. I hoped to have a crack at beating this, and wondered if 5 hours might be a good target time.

I messed up the first climb up Grindslow Knoll, going to far along the valley before taking a weird and inefficient line up to the summit, then made not much of a better job of the second climb to Crowden Tower, finally reaching the summit after 44 minutes. Out of interest, I had covered 5km. At 2 hour marathon pace you'd have covered 15.6km.

On a route like this which takes you away from major paths, deflated helium balloons  are sadly a common site and I collected the first of the day on the descent from Crowden.

Fortunately, it was a lovely "Happy Birthday" balloon, so made a mental note to attach it to Willy's car later. After nipping up and over Edale Cross, soon came the highest point on the route, Kinder Low trig at about 640m. The running around this western side of the course is tough, with plenty of heather and tussocks to scratch your legs and break your ankles. I was feeling a bit knackered already, which after less than 90 minutes running was not ideal! I tried to tell myself I'd already done a good amount of the overall ascent, but as the shark's tooth profile shows us - 7 and 8 (Seal Stones and Kinder East) are the real killers!

By 3:40 in I'd ticked off these two, and my legs were definitely feeling it. I'd make a few more little navigational mistakes, and a couple of times had to stop to check map and compass to make sure I was heading in the right direction. Just before the out-and-back to Upper Ashop farm I made another error, missing the turning off left to cut the corner and instead joining the main track much further up than necessary. Here though, for the first time since some returning half-dozeners on Jacob's Ladder, I saw people! As I descended there were loads of people climbing back up, including the Birthday Boy himself, Sally Fawcett and Simon Mills, and Jon Morgan and Nicky. After a quick turn around I set off after them. 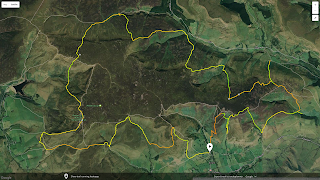 I'm not normally very sociable but it was nice to have a quick chat to a few people, and to be reassured that it wasn't just my legs that hurt. Simon even said a swear word about his legs! However, I stopped concentrating on the navigation, and once I had passed the group I was on my own again and had lost my focus on the descent off Crookstone Knoll. By Nether Moor (4:15) I was back in control of the map, but now keen to get this thing done! I wondered if 5 hours was still possible and decided it was if I ran well and didn't mess up the nav...

Down to the Youth Hostel was OK and I turned and headed for the Druid Stone. I could see someone running well in the distance, and assumed they must be a 10 o'clock starter. Jon had said that someone called Ralph had been going well, but I knew there were two people in the 10 o'clock gang and thought they were both probably still ahead. I caught the guy I'd seen in the distance around the Druid Stone, but followed him rather than trusting my own bearing, ending up taking a longer line than necessary. Damn! 20 minutes to go down, up Ringing Roger, and back down to Edale.

Instead of descending Ollerbrook Clough, then climbing to Ringing Roger, I descended Ollerbrook, then climbed back up Ollerbrook and set off back the way I'd come. Only when I saw Jon, Nicky, Sally and Simon coming down and asked the slightly embarrassing question "Where's Ringing Roger?" did I see what I'd done and adjust my line to climb the right hill. 5 hours was gone. Silly boy.

Anyway, I eventually did make it to the top of Ringing Roger, and thus eventually (via a painful crash on the descent) back to The Nag's Head. My time was 5:16, ahead of the previous (known) record but slower than Ralph Skrimshire's 5:12. Well done Ralph!

Despite the disappointment of messing it up, I had a great day out and with hindsight can appreciate the delights of the route. I will certainly have another go, Willy tells me I ran two miles further than necessary and has promised me a Kinder Dozen masterclass before my next attempt. I also need to make sure I know which rocks are the official top of each of the dozen summits, as it's not always clear on the ground!


As well as one of Ken's original certificates, we were all given a limited edition print by Willy's daughter Beth. These are amazing, thank you so much Willy and Beth! Prizes were also given out (I didn't realise and had left, so cheers Jon for bringing mine) and I was chuffed to win a really nice ceramic coaster with the line up Crowden on it (2nd place = 2nd climb).

All that remains to say is Happy Birthday Willy, and thanks for selflessly organising such a great event for your big day!
2nd Dark Peak DPFR Hills Kinder Dozen Kinder Scout Peak District Running