April 18, 2017
I hope everybody had a fantastic bank holiday weekend. I was lucky enough to spend it on the West coast of Scotland with Lorna and my Mum and Dad. We were in a place called Tayvallich, a little village on an inlet of Loch Sween. A mile's walk takes you to the other side of the peninsula, where from the even littler village of Carsaig you have a direct view across to Jura. It's a stunning place.

After a monster 10 hour drive north (though a stop at Mungrisdale was well worth an extra hour or so), we arrived and set about preparing ourselves for a weekend of adventure. The first step was to inflate my funny old blow-up kayak. I bought it originally to practice for using inflatables at WARC 2013 in Costa Rica, but it has far outlasted my predictions and has been great. There are numerous patches, the non-return valves have died, and it's short fat shape means it waddles around the sea rather than carving swiftly through the waves as a fibreglass boat might... But I love it. However, this weekend saw a pretty stern (boating pun intended) test: I decided it was time that Acer and Maggie experienced the joys of the high seas. 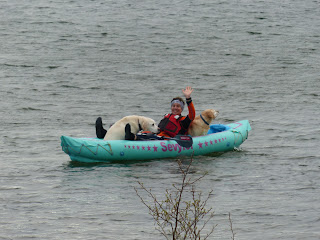 After persuading them into the boat, we pushed off and had a nice paddle around the bay. Normally braver than his wife and definitely a better swimmer, Acer was surprisingly not keen, but Maggie loved it...
As well as the water, I had fun on the land too. Due to the strength work I'm doing at the moment, my long runs aren't all that long at the moment, but I was allowed out for a couple of hours on the hills on Saturday and Sunday. Saturday's run took me along the peninsula between the Sound of Jura and Linne Mhurich. It was an awesome run, even the road for the first section was so spectacular I didn't object to the tarmac under my shoes. After a quick chat with a friendly farmer (with a full quad bike: Two children, one dog, a ewe and a lamb!) I left the road and climbed above his farm up to a trig point.

It was great to run over some proper rough trackless Scottish ground, and I wondered for a moment whether there is a Scottish equivalent of the Accelerate Performance Centre "Hills Made Easy" - "Tussocks Made Easy" anyone?!

On Sunday I headed out on a mountain bike, around the top of Linne Mhurich and down the other side, then left the bike for an hour or so for another fantastic run. More of the same sheep tracks, raging little burns to cross (it was quite wet...), tussocks and heather. Oh, and ticks. By the time I rode back round the top I was knackered and soaked, but very very happy.

Soon it was time to head home, which we did via another couple of high quality picnic stops...

So that was my Bank Holiday weekend. I hope yours was as good!

Finally, a quick shout to my brother Graham, who spent his weekend completing a 272 mile charity bike ride from South Wales to Southend in memory of his friend Arran. A group of Arran's friends completed the ride and are fundraising for Bloodwise. If you want to, you can still sponsor them here.