September 11, 2016
We're coming to the end of our time in the Alps now, and after the busy French school holidays in August, Chatel is now a very quiet place... Things are reaching a close: I have a tourist map on the bathroom wall with maybe 40 summits on it, about 35 of which now have ticks against them, and with a bit more time on Saturdays I was able to travel to Switzerland and race for the first time since the Trail des Cretes du Chablais.

The race was the Trail de Bellevue, a 40km trail race with about 2500m of ascent. The majority of the ascent comes straight off the startline as the race climbs from the start in the village of Collombey to the summit of the Pointe de Bellevue. It was a beautiful day, and after some debate at the start about the kit requirements (basically there was no requirement, but you HAD to carry a backpack... no bumbags allowed!) we were off starting to climb.

There were quickly a group of five of us at the front, including two brothers in full Salomon kit. Reading the start list the night before the race I was slightly terrified to read their team as "Salomon Suisse" and suspected they might be a bit fast. As well as the brothers was last year's winner Emmanuel Vaudan and Thomas Leparmentier. Gradually three of us moved away: Emmanuel, Thomas and I. As we passed an altitude of 1000m Emmanuel moved forward and pushed on, making us work hard to stay with him. We regrouped a few minutes later and shared turns at the front, but soon a flat section saw Emmanuel cruise off into the distance. Thomas was also away in front of me, but by 1500m or so he slowed and I passed. The summit of the Bellevue was a great little peak with a good view down for the last 300m of the climb. I could see Emmanuel near the top as I started the climb, but from the top I couldn't see Thomas.

After the summit at 1:47 the race descended through some incredible scenery and on some fantastic trails. Here I realised that a summer of alpine running has helped me, I was able to keep moving quickly on the difficult terrain which is exactly what I'd struggled with in the Trail des Cretes earlier in the year.

The next section took us back towards Chatel, running along the Swiss/French border through the Pas de Morgins. Here Lorna was waiting with the camera and managed to get a few pictures of us.


After the Pas de Morgins at 23km or so, the race felt like it was not too far from over now, particularly with only 400m or so left to climb. I was starting to feel pretty tired now and began to feel the effects of the hard day's log-carrying the previous day. On long sections I couldn't help myself looking behind but couldn't see anyone. Eventually the summit of the final climb arrived and all that remained was a loop through Val d'Illez and down in to the finish at Troistorrents. The loop was a little cruel as you could see the finish before heading South then North for about 5km, but the views of the Dents du Midi were stunning and the finish made it all worthwhile. I eventually finished second in a time of 4:15. 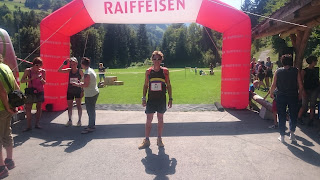 The atmosphere at the finish was great, with people finishing the 17km race during the afternoon as we waited for the prizegiving. This in itself was great fun, and the prizes themselves some of the most interesting I've seen!

But, despite the stunning surroundings and awesome running, and to the disbelief of many, Lorna and I will soon be on our way back to the UK. We had planned to stay here for another Winter and Summer season, but for a number of reasons we've decided to head back to Sheffield. I'm looking forward to new challenges in life, work and running, I have learned a lot out here and am very happy with the way I ran in the Trail de Bellevue compared to the Trail des Cretes.

I am very interested to see how the training I've done here will set me up for racing in the UK. I've been lucky to be able to just run, and to get in a lot of climb almost every day, but I have been a little "feral" and must confess that my Strength and Conditioning, core work and drills have been... minimal. I'm thinking of racing the Open Adventure Lakes in a Day again, so I guess we'll see!