May 10, 2015
This weekend I've been up to Scotland to recce a few sections of this year's birthday treat. After the (ahem) success of last year's "29 at 29", the plan for my 30th is shorter but still very exciting: I'm hoping to complete the Scottish 4000s duathlon. The route involves a run up the four 4000ft summits in the Ben Nevis area, a road bike ride of 60 miles, and a second run over the 5 Cairngorm 4000s.
The plan this weekend was to look at as much of the runs as possible, focussing on the second one, and gently enough to aid my continued recovery! I left Sheffield on Friday afternoon, arriving at Oxenholme station at 5ish, where I was joined by Wil and Lucy Spain. We set off north and were soon in Scotland. By Hamilton we were hungry so went to Pizza Hut. Takeaway ordered we nipped to a supermarket to stock up on hill food then returned to collect what turned out to be (thanks to various special offers) rather a lot of pizza! 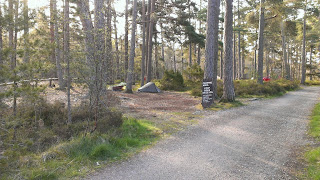 We arrived at the Rothiemurcus estate campsite too late to drive on, so walked in and set up our tents. The next morning was bright and sunny at first, but by the time we reached the end of Glen Feshie ready to start running it was cold. We wrapped up and headed off on the long first leg to Cairn Toul. After we left the track there was a lot of snow around, but the sun was out now and we had a great time. 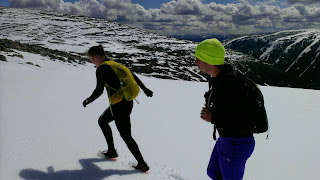 From Cairn Toul we dropped back to the col and climbed to the second summit: Angel's Peak. From here we could see the rest of the route - the ridge round to Braeirach, the steep descent and climb to Ben Macdui, and the run off to Cairn Gorm. Due to the approaching weather and the time, we decided a visual recce was enough today and started to head back down to the car. 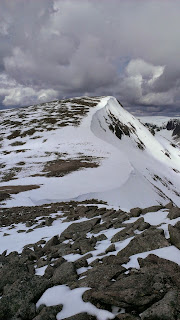 After a never-ending descent of Cairn Toul we were back at Glen Feshie and tucked into the remains of the pizza... Unfortunately at this point we discovered that Lucy's carefully selected veggie model was in fact covered in beef. Wil and I helpfully ate it. 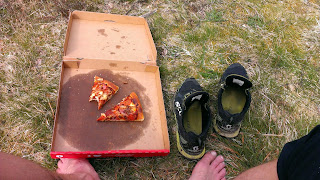 Next, we drove the reverse of the road ride to Fort William, where we decided to stay in a backpackers hostel rather than camp (due to the forecast stormy night). We chatted to some German WHW walkers, made curry in the hostel kitchen, then had a quick pint in the pub.

This morning the weather was definitely wetter than yesterday, but not as horrible as forecast. Breakfast saw the final last stand of the pizza and off we went to Aonich Mor. From the gondola car park, Wil and I planned a quick few hours up to the ridge and back, while Lucy went mountain biking with a local friend. The best route up was hard to find due to the mountain bike tracks, but once higher up we found a decent path. Above the gondola we followed ski runs up till we met the ridge at about 1100m, then continued up a bit further before we ran out of time at 1200m or so. The summit was another kilometre along the plateau but in very low visibility we decided it was best to run away.

At the cafe we found Lucy and Edie and sat down for some lunch. A jacket potato filled with cheese and haggis was one an option I could not pass up, and it was as good as it sounds! After one final shopping trip we set off south. As I write this I'm on the train back to Sheffield.
It was a great weekend, it's been far too long since I was in Scotland and I now feel ready for the full route in a fortnight. Thanks Wil for driving, and Wil and Lucy for checking my navigation! 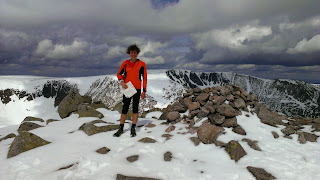