March 08, 2013
As I said in my previous post, the traditional start to the season of silliness was last weekend. I ran the HPM with Martin Beale, Tim Laney, and Martin Indge (who was a last minute stand-in for Martin Humphries), as the "Avon Mountain Athletes"... Having finished third last year we started at a few minutes to midnight, closely followed by Flippers Gang as last year's second place team did not start.

It was good to be underway as we ran out onto the road, then turned right and into the farmyard, where we immediately got our feet covered in, er, slurry. We trotted on up towards Hollins Cross, soon after which we were passed by Flipper and his gang. This was expected and has happened every year I've done this race, I wondered if we should be hanging on to them but its a long race and anything could happen.

I won't describe every step of the race, but it was a thoroughly enjoyable one. Some who have completed this race (Wil) might disagree but the conditions and weather on Friday night were fantastic - much of the really boggy bits were frozen and the night was clear and bright. As a team we ran well, there were of course the expected low moments for all of us, but our navigation was again perfect thanks to Tim and Martin B.

I learnt one important lesson - for a race like this I need to take a bigger pack! A Laser tent does not fit in my little racing rucksack! Martin gave me the tent at Moscar and I spent a few minutes struggling to get it in the pack before giving up and leaving it dangling...  I then charged down the road to catch them up and spent another 10 minutes trying to get it in, before having to give up and ask Martin to carry my waterproof trousers in return... 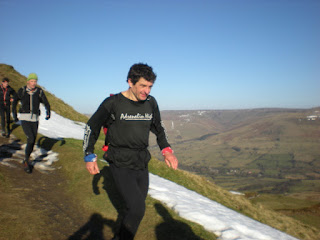 Tim, followed by Martin B and me

As the sun rose on saturday morning we were treated to a fantastic sight, captured by a checkpointer here. It was a beautiful morning and all the pain from the night before seemed to fade away. We all became a bit more likely and plodded on well. It soon got quite warm and I was again reminded that my pack was too small - hence I'm still wearing my waterproof in the photo above!

We were getting close to the end now and started to see a couple of teams approaching us from behind. We tried to keep them at bay but as we climbed Brown Knoll the Carnethy ladies team were among us... They were working well as a team, carrying each others packs and looked strong. We knew we'd started a while after them so if we kept going well we could probably beat them. We knew we were in 6th position, a bit disappointing after the last couple of years but it had been a brilliant night out.

The last stretch passed quickly and soon we were descending the rocky path down from Hollins Cross, through the slurry farm yard again and we noticed the other team behind us were getting close... Here I am sorry to say I resorted to dirty tactics. After our team had passed through each of the little gates on the final path in I made sure they were as fully closed and locked behind us as possible, just to give us an extra few seconds! I think the team behind were a little upset by this so if any of them are reading I apologise - a racing incident!

We held them off, just, and ran into Edale village hall in 9:33. Another fantastic HPM, thanks to Martin, Martin and Tim, it was a pleasure as always. Congratulations must go to Flippers Gang for a new record of 7:52, and also to Mountain Hardwear for pushing them. Speaking of Mountain Hardwear, talking to a certain Mr. Collison after the event it seems he's running Wuthering Hike this weekend too... Oh good.