Not 4th for once!

April 15, 2012
There was much confusion over the past week about yesterdays racing - the fast fellrunners went to Coledale Horseshoe, whilst the plodders amongst us went to Calderdale Hike. I was running the long race (37 miles - there's also a 26 mile option). Calderdale routes are used for three years before changing, and this year was the first on a new route... 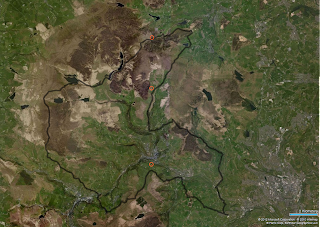 One thing about Calderdale, compared to some other races, the time between registering and starting is pretty short... Even registering at the earliest time possible, you've only got 45 minutes! So there was slight panic from a few of us on the start line, but I managed to be ready before the start and had a moment's calm...

Then we were off! I ran at the front with Martin Beale and Jim Mann, with Ian Shrimpton and Jason Stevens just behind us. I felt quite comfortable with the pace, as the three of us took turns to lead along the roads and tracks through CP1, up above Mytholmroyd and eventually round towards Stoodley Pike. Martin, Jim and I carried on along the path a bit then cut up towards the monument, where we saw Ian who had taken the longer shallower route to the top.

From Stoodley I followed Martin down across the moor, and we met the other three guys at the bottom. They had come along the path and gained on us a bit. I won't complain about Martin's lines though, as without him I would have messed up in a few places! From Stoodley, the next CP was at Lumbutts church. After this one Martin and I moved past the other guys and took a little lead. I think this meant that they couldn't see us on the cut up to the church (reverse of Wuthering Hike route) which I think got us a bit more time... We trotted along nicely through the Todmorden golf club CP, once we found the marshalls hiding in their car!

I led along the next section, as the weather turned and we got hailed on. I didn't bother to put my jacket on as I decided it was a shower and would eventually pass... Just after CP6 I saw some more runners, presumably on the short course, being filmed by a man with a very posh looking camera from the back of a car! Calderdale Hike: The Movie - out soon...

The next section was one I was a bit apprehensive about, I guess I could've waited for Martin and followed him but that wouldn't have been very sporting. So I set off across Black Hambleton on my own, found CP7 at the trig pretty easily, then set off across the long moist boggyness. I have no idea why I took the line I did, but basically my route to Widdop reservoir had lots of climb, was either wet or tussocky underfoot, and about a mile longer than it could have been! Needless to say, as I joined the Pennine Bridleway close to Widdop, I was back behind Martin, Jason and Jim.

This made me angry! So I pushed hard along the next section and by CP9 at Withins I was back in second, just behind Martin. We cut up East and joined a track at Harbour Lodge, then down the track into CP10 at Tom Sell's Seat. From there we went around the pointy side of the reservoir, across the moor to the track at Deep Nitch. We cut across to rejoin the main track, where to our horror, we saw Ian! By the time we got over the stile he had 50m or so on us, and was running FAST!

Here I had to make a decision, the safe option (stay with Martin, navigation should be OK and probably end up 3rd) or the racing option (run after Ian, try to catch him whilst navigating). Well it's a race isn't it? So I dug in and set off after Ian up the track from CP11. A few minutes later I looked down at my map and regretted this decision: Falling in a bog on my adventures near Widdop had soaked my map, and the bit I needed to get round the tricky section through CPs 12 and 13 was now just a brownish blur! I managed to find the checkpoint at the New Bridge car park, then basically headed east and hoped for the best! Occasionally I'd catch a flash of Ian's blue jacket in the distance which would give me a boost for a few minutes. 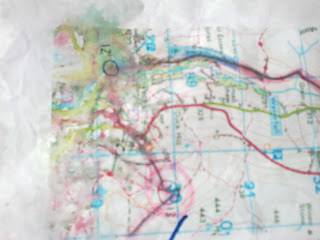 I finally lost touch with Ian just before CP14, when I hesitated at a junction to make sure I was in the right place. I think I knew even before this that Ian was going too well to catch, so now I had to concentrate on not losing 2nd. I started counting the map lines, just 5 kilometers to go... From 14 to 15 felt like one of my best sections of the race, I navigated along the road, ticking off every building, footpath and feature as I passed them until I reached the canal. Last checkpoint! I knew that there was an option to run along the road, but decided to use the canal. I struggled to find the features on the map here but somehow found my way over the canal, river and railway line and up a steep track through some farms to the road. I thought I'd been slow along the canal so half expected to look left and see some other guys in front of me, but there was no-one in sight... They were either behind or at the finish!

I ran up the drive to the finishline, and stumbled up the steps into the Cricket Club to finish. I could only see Ian but wanted to check... "How many here?" I asked, and was told "Just him".

Congratulations to Ian on a brilliantly paced race and a strong finish, and thanks to Martin for the times we ran together. Congratulations also to Helen Skelton on winning the ladies' race. Yesterday was the first race that I've worn Injinji toe socks for, and they were great despite tarmac, wetness and bogs! Excellent news, as I won another pair (and a box of Clif bars) for 2nd place. 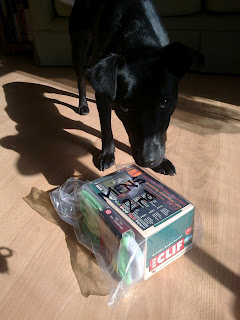