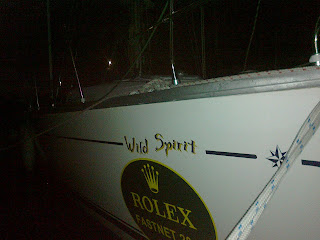 Clearly the Fastnet is quite different to any of the other racing I have been doing recently. For any runners reading, here is an explanation (this is what I have been told anyway, as I am not exactly an old sea dawg myself)...

The Fastnet is one of the classic ocean yacht races. The start is from Cowes on the Isle of Wight, the route most boats then follow is along the south west coast of England, around the Lizard, throught the gap between Land's End and the Isles of Scilly, then turn and head for the south coast of Ireland, where at the western end is a small rock with a lighthouse on it - predictably called Fastnet Rock. After rounding the rock boats head back towards the Scillies, this time around the south of the islands, then east along the coast to finish in Plymouth. I was taking part in the race on a 40 ft yacht called Wild Spirit, with the eight other crew. Finishing times are anything between sub-48 hours for the fastest multi hull boats to nine days for the smaller boats. We were expecting something between 5 and 8 days (apparently it depends on the wind).

We set off on Sunday morning at 11am. I didn't really know what to expect. The start was madness with boats all over the place, all trying to get across the line at the right moment and in the right place. We saw all kinds and sizes of boats at the start including the expected winner, the brand new 100 ft "Rambler" with 21 professional crew on board. Our start went pretty well and we were underway along the south coast. We soon started our 4hrs on / 4 hrs off watch pattern. The weather was a bit rough at times during the first few days, and most of the crew were seasick at times.

Due to the watch system and my general forgetfullness I am not sure when we passed the Scillies to set off across the Irish sea, but I would imagine it was around monday night. The weather was better now, with reasonably good wind most of the time and not too much sicknesss. I enjoyed a bit of helming ("driving the boat"), and things were generally pretty busy. This was likely to be the longest race I had ever done and I had been a bit concerned it would feel like a looooong time - 9 people on a 40ft boat for 6 days! But time seemed to pass quickly, and I really enjoyed the camraderie and teamwork side of things.

We rounded the rock at just after 9am on Wednesday, 40th of 68 starters in our IRC-4 class. Just after the rock the winds faded, and for a while our online tracker showed us doing some reversing! It is at times like these that the experienced sailors start to do things with the sails and steering wheel that the rest of us (ok, just me) understand about as much as some sort of witchcraft. At these times I do as I am told. My 45 degree tea-making has come on nicely! Anyway, once we got going again we seemed to make our way quite quickly back towards Cornwall, via an incredible evening with sunset, dolphins and even a sperm whale. 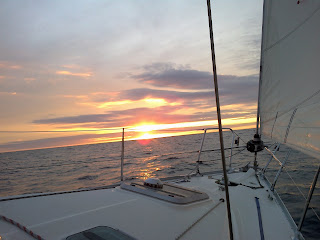 Being a northerner, I was not sure where Plymouth was, so was surprised to hear that it is quite far west, meaning that the return leg from the rock would be significantly shorter than the way out. It didn't seem to take long at all, at least until nearly the end. The end of the race was amazing, as we came in to around 5 miles to go, we started to see lots of green (starboard - right) lights, around 30 boats... Quite amazing to be so close together after five days! The wind dropped, we were all now up on deck, willing the wind to hold on enough to keep moving, whispering and moving around on tiptoe where necessary to try to keep some momentum.

Due to some impressive sailing from our crew we managed to approach from a different angle to the other boats and kept in the wind longer, meaning that we quite literally sailed past them, and made up a lot of places! It was not over though, as we weren't sure whether we would squeeze past the lighthouse at the entrance to Plymouth harbour, which was the marker at one end of the finish line. From the front of the boat I could see rocks outside the lighthouse and we tried to keep as far inside the line as possible to avoid having to tack and lose the places we had just gained... We squeezed just inside the rocks, and at 1:51am on Thursday morning the hooter went and we had finished!

The race was brilliant, and I am very grateful to Paul and the rest of the crew for the opportunity to race, and also for their patience with my inability!

PS: It really was a classic race this year, with both the multihull and monohull records broken by Banque Populaire (1d, 8h, 48m) and Azzam (1d, 19h, 39m) respectively, and the favourite capsizing near the rock (all here).