July 25, 2011
This weekend has nearly been a de-ja-vous of one a couple of years ago, when I wrote

"This country has been busy achieving in the field of sporting endevour this weekend, with Lewis Hamilton returning to the podium after a disastrous first half of the F1 season, Mark Cavendish destroying the competition to win on the Champs-Elysees and Bradley Wiggins finishing 4th in the Tour de France.
The main arena of athletic excellence this weekend however, was of course the Pudsey 10k."

The only difference was that after a fall on stage 7 of this years Tour, Bradley Wiggins is at home with a broken collarbone...

Hamilton has not had a great start to the F1 season, but managed to win in Germany to put himself back into vague contention, although perhaps only for second place in the championship after Sebastian Vettel's spectacular run of results this year!

Cavendish again won on the Champs-Elysees, his fifth stage win this year. This year though, he also finally won the Green Jersey. Cav is a big hero of mine, even more so after I recently realised we were born on exactly the same day. We actually went to watch a stage of the tour this year... 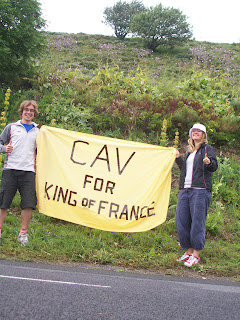 So, that leaves Pudsey 10k. Hot, sweaty and hard. It was good to be racing in a Pudsey Pacers vest again and I was proud to be part of the club on our race day. This pride may have led me to get a bit carried away and for the first few minutes I was in the leading group of four with James Clark (Pudsey Pacers), Richard Pattinson (P&B) and Tim Midgley (Bingley). As you will know if any of those names ring a bell with you, this was a bad plan. Anyway, those guys headed off on the flat road sections and I left them to it, dropping back to a pack behind and swapping places around 10-20th for most of the race. I had hoped to be able to make a few places on the steeper climbs and rocky descents (this is not a normal 10k!) but was basically knackered from keeping up on the tarmac so this didn't happen much. In the end I did 41:15 for 21st. Faster than before but a bit dissapointing I guess. The top three were:

Congratulations to Nigel and James Clark (4th) for Pudsey Pacers.

So there we go. The last thing I wrote on that post two years ago was "Lakeland 100 is now only a few days away. I'm not really sure what will happen, but it's going to be interesting!" Two years and two L100s later that's still true...