We set off to on 21st May, flew into Zurich, delayed the Swiss travel system by loading and unloading our kit in Bern, and eventually arrived in Interlaken 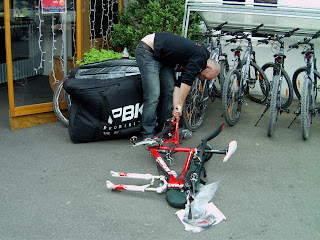 On Tues 24th we got the maps, and on the morning of 25th May the Prologue started... 4 x 90min sections. Our first section was the "Trotti Bikes", basically big scooters! We struggled a little with these, except JC who had used them before. Then, during the hottest part of the 30°C+ day we set off on parts 2 and 3 of the prologue, a 9km then an 11km off road run. We ran well and weren't too far behind the leaders in our group of teams. The final part of the prologue was rafting. This was non-competitive apart from a section in the middle when we were timed. It was my favourite part of the day, mainly because we got soaked and jumped in at the end. 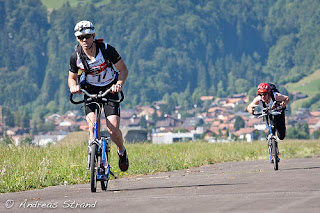 After the Prologue we set off on the restart, 33 minutes behind the leaders, the local R'Adys team. After running around 10km, Stage 1 was a paddle. I didn't enjoy the run, was having some stomach issues and it felt like a lot longer than 6 miles! Anyway, having arrived at the paddle we got our kit sorted, Al and I in one sit-on and Lucy and JC in another. The paddle was 28km in total, with one checkpoint on the way down the lake, one at the end, and then a long run all the way back.

Arriving into transition we set off on Leg 2, the first bike leg. I was cold when I got in off the paddle so put lots of warm stuff on and started to feel better. This bike leg was to be a long ride, then a stop and a short-ish run up to a checkpoint, then further ride back to the next transition. However, at about 3am JC was having serious problems with his leg. To cut a long story short, he had seriously torn his hamstring and although battling on for a while had to retire. We put up the tent to keep everyone warm and dry, and the organisers came and collected JC. It was a sad moment as the team became "unofficial" from now on, but we hoped JC would be ok and the three of us carried on to the bike/trek changeover.

It was about 6am at the changeover, and having lost a few hours of time we decided not to do the short trek, but to have half an hour's sleep then carry on with the bike. After another couple of hours biking we were at the next transition, ready to go onto the Schiltorn Trek. 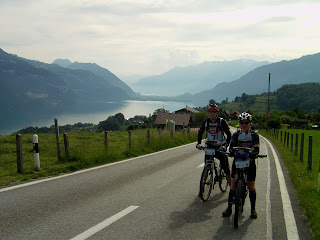 Lucy and I set off up the Schilthorn, Al decided that he did not want to come up as the descent would damage an existing injury. We trekked up the mountain for about 5 hours, and eventually reached the spectacular views of the Eiger, Monch and Jungfrau at the top. 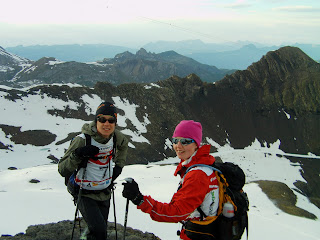 At the Schilthorn top there was a decision to be made. At the time we arrived we could not carry on to complete the rest of the leg, so we could either sleep and wait until morning to carry on the trek, or take a cable car down the hill at midnight and trek back into the transition. We decided to sleep for a couple of hours then take the cable car, as did about 4 other teams who arrived around the same time as us. On the way down I began to think about joining another team to carry on with the race, and just before the transition at the bottom I asked Team Sleepmonsters/Likeys.com (who had lost a member already) and after some deliberation I joined their team.

The first section with the new team was the Eiger traverse bike leg. The weather had got a bit colder and foggier than the previous couple of days, which to start with was a welcome change! We pedalled through some spectacular areas, including many places I had read about in "The White Spider", such as Grindelwald and Kleine Scheidegg. After the ride, we were onto a run to the Canyoning section. The weather was now officially rubbish, and we were soaked before we got there. We changed into already wet wetsuits and rappelled down a large wall into the river. 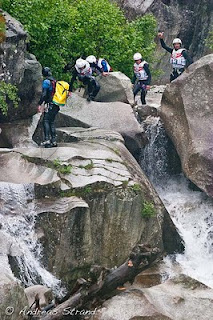 The Canyoning was great fun, with some really big jumps into pools an long slides down rocks, but it was pretty chilly! At the end we changed back into wet running clothes and trotted back to transition. After a quick change it was onto another trek. At this point my memory starts to fail me, but I remember this was a long overnight trek. We enjoyed it and were feeling like it wasn't too far from the end now.

Next, the penultimate leg... A paddle on the lake to the other side of Interlaken. The weather was now better and I paddled with Mark, and we were amused by Nat and Gary's apparent directional issues! This paddle was shorter than the previous one, 11km, and it seemed to be over pretty quickly and painlessley. We transitioned, saw Al and Lucy in transition, got ourselves sorted out and headed out in high spirits on the last trek. We had been going for around 3 days and a few hours, and I had slept for something like 2 and a half hours. Nat and Gary had slept a little less, but Mark had hardly slept at all, not that you could tell! 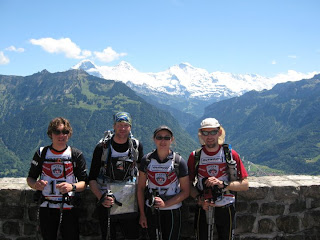 The last trek was a long one, and went over many high ridges. The weather was now hot again and we had some spectacular views over the lakes, mountains and down into Interlaken. As we set off on the trek we also heard the PA system from Balmers tent village announcing the arrival of the winners - Silva Gerber Adventure Team.

A good few hours and lots of ridges later we were making our way back towards Interlaken. It was now dark. Mark and Gary navigated us up then down a spectacular knife-edge ridge, now all having to keep an eye on each other - don't want to fall asleep and wake up thousands of feet below!

Now we were only 6km from the finish. We stopped at a mountain restaurant which was just about still open, had a cup of tea then headed off on the final few miles. We were bushwhacking through a wooded area and all feeling pretty sleep-deprived. Gary suddenly seemed to drift off, he couldn't speak, didn't seem to hear us and was walking very slowly if at all. Again cutting a long story short... The helicopter winchman arrived in a small area next to us, Mark and I waving strobes while Nat shared the survival bag and tent with Gary and tried to keep him warm. We wrapped him up and Gary and the winchman went up together, to hospital in Interlaken.

That was the end of our race. Luckily, the very jolly American team Dart Nuun passed through the woods at that moment and we joined them to the next checkpoint, from where we called for a pickup. My final memory from the race itself is struggling to stay awake in a little barn as the minibus came to get us.

So, that was the APEX. Epic. I loved it and I'm glad I (nearly!) finished, although I do seem to be bad luck! JC is having physio on his hamstring, and Gary was back in the hostel by the morning.

There's a little video here if you want to watch...
http://www.youtube.com/watch?v=iZmR3BA1CBA