First race, and plenty to work on...

January 12, 2011
Apart from a club 5k time trial last thursday, the Open 5 at Sutton Bank on sunday was my first race of 2011. I raced the 5 hour run/bike event with George Bullard. We're racing four of these events this year and this was our first together.

After much debate we decided to run first, thinking that it would be easier to mark our maps and plan a route whilst running than biking. We realised more points were available for the bike than the run so decided to split our time 2hrs run / 3hrs bike. The weather felt really cold at the start but soon got warm once we were on the go, and there were some great views from the high points of the route. The run went well, with only a small navigational error towards the end which saw us carry on slightly past the finish (we were in some woods, not just blind) we were back into transition, having got all but one controls in 2:14.

A quick transition (2 mins 47) and out on the bikes. From here things went a bit downhill... First we tried to go up the Cleveland Way, having looked at it on the map further along we had not realised that there was a section of footpath before the bridleway started. So after a quick change of plan we looped round by road and trail to join it. There were a few areas of snow which made it quicker to run with the bike, and it seemed any slightly sloping tarmac was covered with a sheet of ice. This, of course, was the same for everyone, but I think it was our bike navigation which really let us down. Only my bike had a map holder and I found it hard to navigate whilst riding, and because of this there were a few errors.

Consequently we pretty much ruined our good run by a bad bike. On the run we had four fastest legs, and were second or third for most of the others. On the bike we had a couple right at the bottom, except the leg back to the finish when we were fastest, despite stopping to try swapping bikes, then stopping again to change back. However fast we got back though, the finish was another small disaster. 18 minutes late means 65 points deducted, taking us down from 430 to 365.

In the end we were 13/37 in Male pairs and 43/139 overall. Lots to work on for next time! Team Accelerate did do better with Lucy Harris, who was 3rd female solo with 404 points. Also well done Karen on winning that category. 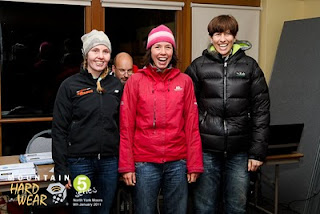