March 13, 2011
Apart from the last-minute HPM last weekend, yesterday was my first ultra of the year... Haworth Hobble / Wuthering Hike. My first race for a while for Pudsey Pacers, and it was great to see two other Pacers (Russell and Darryl Stead) taking on their first ultras (and both running well!). Lucy Harris from Accelerate also ran, going from none to two ultras in two weeks!

I nearly missed the start as there was a loooong queue for the toilet. I was running towards the startline when I heard the clock strike and hundreds of runners set off towards me! I quickly got to where they had started, turned around and we we're off! As everyone knew, the pace was high. For 32 miles the guys at the front went off FAST! I stuck in a group just behind them, something around 15 - 20th. I recognised Duncan Harris and a couple of others at the front, and Martin Beale was in the same group as me. 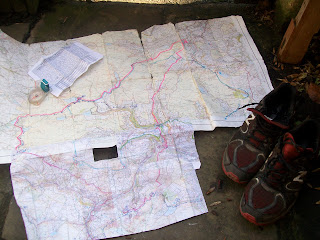 I won't write a huge long report, but the race went pretty well. I had a bad patch just before the climb up Stoodley Pike but after reaching the top and having some food I was better. Into the last 8 - 10 miles I was feeling tired, last weekend catching up with me perhaps! After the New Bridge checkpoint we climbed a long drag, one of those where you have to keep running or lose loads of time walking. I passed a guy from Bingley on the way up but was pretty slow and was caught by Martin and someone else. They had had a small navigational mistake somewhere so I had got past them without realising. Down the next descent and getting closer to the finish, I was able to push on and pulled away from them a bit, but I knew the last little bit around Penistone hill might lose me some time, so wanted to get a bit of a gap to beat them.

I did get a gap of a few hundred yards, but missed the quickest route around Penistone Hill... See picture below! Basically Martin, Andy Mouncey and someone else got past me and I couldn't quite catch them by the end. Anyway, it wouldn't make much difference for points in the Ultra series, just annoying to lose places so near the end! I finished 14th in 4:41. Duncan Harris did win in 4:05, a great time and quicker than has been done for a few years. 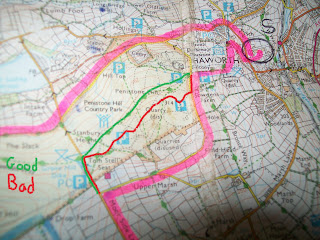