Last week I had another go at the Dartmoor 500s. It went a lot better than last time ! Last time there was lots of rain and lots of wind, I got cold crossing rivers, going slowly and getting soaked over the tops. It was a fun but tough day out. Charlie and I supported Robin Upton on his 500s last year, I ended up running about 65km of it and really enjoyed the route. The route is simple, linking all the Tors over 500m on Dartmoor in one wiggly day out. This includes the 5 over 600m (though some people seem to miss Whitehorse Hill, perhaps because it's not called a Tor or because it's pretty close to Hangingstone Hill, but I went there too). The whole route is somewhere between 95 and 105 km, with about 3500m of ascent. Dartmoor 500s route I left Cornwall at 4:30 and drove up to the Warren House Inn. Driving the car to the end of the lane before defrosting the windscreen (to avoid waking everyone up) was about the most tense moment of the whole day! Being from the north it is et
Post a Comment
Read more

I might've mentioned ... The Fellsman is pretty much my favourite race in the world. It’s long, tough, low key, (relatively) cheap and has a long and fascinating history. And after a couple of years off, it was great to see the race back this year. After winning the last race in 2019 I would have the honour of wearing race number 1, so though it’s now a long way from home there was no way I wasn’t going to be there! In the weeks leading up to the race I finally got the trophies engraved and tried to brush up on the route. Recces weren’t possible so I’d have to rely on my memory and mapreading, neither of which are renowned. Last minute revision   After the trip up on Friday, I got my kit signed off then retired to the car faff with it, eat some dinner and sleep. A week or so before the race my pile of food suffered when Buddy got into the room and ate a quite incredible amount of stuff in a very short period of time. 3 Yorkies, 3 Snickers bars, at least one flapjack and a good pi
Post a Comment
Read more 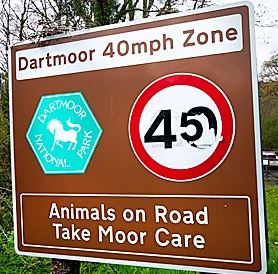 Ignoring the weird numerical editing, who doesn't love a good pun. This one is often seen on Dartmoor, and will now remind me that I need to show the place a bit moor care...   Happy new year! This year after Christmas at acceptably small family gatherings, Lorna and I had new year with the dogs in a shed (converted for Air B&B purposes) near Horrabridge, on the south western corner of Dartmoor. While we were there I decided I'd fit in a long run. Living as we currently do in Cornwall we don't really see much cold weather. I haven't run in long legs since we moved here and short sleeves had been the best choice for most of December. Not like the good old multi-layer days in the frozen north! Having not done a proper long run for months and having a bit of a cold, my initial plan to try to full Dartmoor 500s (100km, 3400m ascent) seemed a bit foolish so I decided on a revised plan: I'd run in from our accomodation to the south west corner of the 500s, then run vi
Post a Comment
Read more

Let's be clear from the start - the Three Peaks Yacht Race is a bizarre event. Many aspects of it just would be very different if you designed the race today, but then you probably wouldn't do that anyway. It's a wonderful event, run by a group of really dedicated and hardworking organisers, but it's a serious undertaking: It's a long way, there isn't much sleep to be had, and if you're not standing on the walls and hanging on while using the toilet, you're going slowly. And if you're going slowly, you're about to be rowing. That all makes it sound like it's not fun, but that isn't true: It's amazing fun! This year I was racing with skipper Paul Jackson (father in law), navigator Nick Ridgeway, sailor Craig Williamson, and running with Dave Robinette. This was the team assembled for the 2020 race which finally took place last week. We were racing as many times before on Wild Spirit. WS is a very solid and pretty heavy boat and really
2 comments
Read more
More posts