Sleep when you're dead?

March 07, 2011
FRIDAY
On friday afternoon I was listening to a man talk about the most suitable materials for Solid Oxide Fuel Cells when I was awakened by a vibration in my right leg. At the end of the lecture I checked to see what this vibration had been caused by, and 6 hours and a lot of food later found myself with Martin Beale, Tim Laney and Martin Humphreys running out of Edale village hall to start the High Peak Marathon...

The HPM is a 42 mile fell race run by members of the Sheffield University High Peak Club. Start times for running teams are from 11pm, with the fastest teams starting last. Martin, Martin, Tim and another Martin (Indge) had run well last year and finished second, so only "Flippers Gang" were left in the hall as we set off. We were soon catching slower teams as we climbed up to Hollins Cross, over Lose and Win hills and off towards Moscar. At this point we were third but still had quite a few teams ahead of us. We were running well and the weather was pretty good...


SATURDAY
On and past halfway, we prepared ourselves for the most infamous section of the route, over the bogs of Bleaklow. Here (as throughout) Tim's route knowledge and navigation were brilliant, especially as it was now foggy and visibility was pretty short. All did not go perfectly though, both Tim and I were swallowed up to our waists by the bog monster a couple of times and a few other teams were going well, particularly Team Krypton who passed us at one point. After the bogs we reached the Snake road crossing and around 12 miles to go. I think we were now second, and went well up Mill Hill but were getting tired and worried about teams catching us. Looking behind more and more often we passed the checkpoints at Edale Cross and Rushup Edge, then around Mam Tor and back to Hollins Cross. Descending the rocks towards the final road to the finish I remembered climbing up this way 9 hours earlier. It had been a great race and had passed very quickly, I was very pleased to have kept up with these guys and really glad I was able to join them.

So, that was Friday night and Saturday morning. When I got home I changed a few bits of clothes and headed out to our Accelerate Mountain Bike skills session with Jon Heaton. I was late but met Alasdair in the car park, and we managed to track down a tired looking Accelerate team (as above) practicing manuals in Ecclesall woods. We joined in and learned some useful stuff... Front and rear wheel lifts the proper way (not just yanking the bars!), weight shifting and trackstands. Plenty of useful stuff to practice so thanks Jon and sorry if we were a little slow on the uptake, if there's ever a gang of Zombies that need a bike lesson I think you're the man!


SUNDAY
Yesterday was the final act, the Open 5 at Bakewell. George has unfortantely injured his leg, but as Alasdair and I would both have been racing solo we decided to team up for the race. I was feeling knackered and Al had raced a duathlon before the bike session yesterday too, so we decided just to go out for experience, having not raced together before.

The weather was good but chilly before the start. We decided to run first and the sun soon came out, this wasn't too bad after all! After a few miles the legs seemed to wake up a bit, although the quads still did not enjoy descending hills or steps!

We decided to run for two hours and planned a route to get as many controls as possible. This went pretty well, mainly due to Al's excellent navigation, and we transitioned after 1hr 48, having got all but one run controls. I was pleasently surprised by this, but given Al's triathlon background and clearly fresher legs was a little scared of the bicycling...

With good reason. The swinging elastic towline hanging off the back of Al's bike was the centre of my world for the next three hours. We never used it but quite a few times I convinced myself we were doing, which helped me up some hills. A fair few of the bike controls were accessible by road so there was some fast riding, but still some areas where we could practice the skills Jon taught us on saturday! We had a good bike leg, I can't tell you much about the route except that it was expertly navigated and swiftly executed by one team member, with another desperately hanging on. I think the picture of us finishing illustrates this quite nicely!

Anyway, we finished with nine minutes to spare, having got all the bike controls. Whether this would have been enough to get the final run control is a good question! This event was unusual in that one pair and three individuals scored a perfect 600 points, and lots of placings were decided on time. In the male pairs, David Lawrance and Warren Mason cleared everything to win, second place got 595 (missed a five-pointer on the bike), and third place got 590 points in 4:48. We also scored 590, but took three minutes longer (although that does include two punctures!). A much much more enjoyable race than I was expecting, and big thanks to Alasdair for dragging me round. Lucy had a great race and finished 4th in the female solo category on a day when nearly all the big guns were out!

There endeth a long weekend, and possibly the longest post ever... 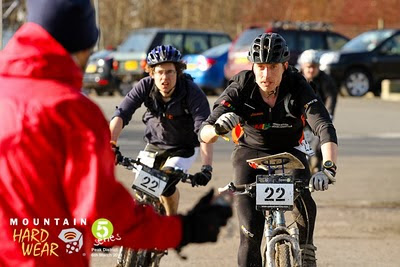