March 29, 2011
Sunday was the catchily titled “UKA 100km championships, incorporating Scottish 100km championships and Anglo-Celtic Plate”. This essentially meant that I spent the day running around a park in Perth quite a long way behind the owners of some lovely tracksuits. It was the first 100km road race I had done, and the first lap race. It was very different to off road ultras in a few ways...
On Saturday night we had a race briefing by a man from Scottish Athletics, telling us about the course and how the day would work. This man was obviously important in this sort of circle, and knew everyone’s name but mine! As the teams dispersed I set my tent up on the startline (in order to confuse them), and went to sleep feeling a bit scared.
Sunday morning started an hour earlier than planned due to clever mobile phone / BST issues, but eventually the national teams from Scotland, Ireland, Wales and England arrived and set up their tents and flags. I had some beans and put my shiny new shoes on ready for the 7am start.
It was cold at the start but just about fully light. It was really foggy on the first few laps so we couldn’t see much, but each lap the fog rose slightly and more of the park around the course revealed itself. North Inch Park was really nice, with the River Tay at the far side of the oval course, and a golf course in the middle. The course was definitely flat though, with one climb of about three feet each lap, making somewhere around 120 ft vertical ascent for the race! 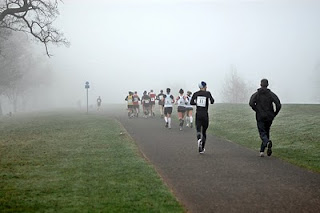 We would run 42 laps of a 2.4km loop, meaning that each lap we passed through the finish area and could get drinks, food, toilet, etc. This was a new experience for me, and quite soon I realised one of the potential problems with it... It’s tempting to stop each lap! I was having some stomach issues (two days at a wedding perhaps not the best preparation?) but had to tell myself to only stop every two laps at the most. The plan had been to aim for 10 hours, meaning around 14 minute laps, so four and a bit laps an hour. During the first two hours I did ten laps so was a bit ahead of schedule, but at the end of the second hour and with continuing stomach issues I decided to back off a bit.

This helped and by 15 laps I was feeling better. It was now a bit after ten in the morning, and starting to get warmer. At 11 o’clock the 50km race started so it became really difficult (rather than just quite difficult) to work out who was lapping you, being lapped, overtaking, or what. So I gave up, it was clear there would be no giant killing of national runners today so I focused on the ten hour target. I passed 21 laps at about half past one, leaving some but not loads of leeway on the target.
After that it gets slightly hazy, but I remember it got hot, I started listening to music, and my feet hurt. All of which are illustrated in this picture: 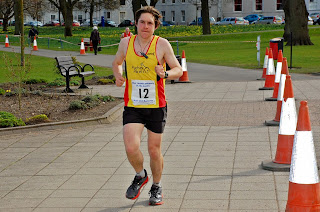 7 hours after the start I passed through the start/finish at the end of my 32nd lap, and a couple of minutes later Craig Stewart of Scotland won the race in 7:01:36. Inside the UKA ‘A’ standard for a guaranteed place on the Commonwealth games team, and winning him both the UK and Scottish 100km championships.
So, by the time he was washed, changed, had a sleep, eaten, probably read a book and whatever else he did in three hours, had I finished?
Yep... 9:33:51. As I passed through the S/F to start my last lap I was announced as doing so, but shortly after I heard someone else being announced as also starting their last lap, and decided that whatever position I was in I wanted to stay there! Consequently I’m pretty sure my last lap will be my fastest of the day, and I even managed a sprint finish (looked back, confused flag with chasing runner, etc...).
So, positives: I wasn’t last, and first and second half splits were pretty even. But I was 34th of 39 and although under my target, feel like I was pretty slow in the present company! A good experience though to have a go at an ultra on the road and the (very) flat.
Pictures with thanks from www.roadrunpics.com
Results from http://www.scottishathletics.org.uk/index.php?p=80&itemType=fixtures&itemId=12894