February 11, 2016
I've been living here in La Combe, in the Trois Vallees in the French alps, since November. To be honest, in skiing terms, it's been (so far) a horrible season - there has really not been very much snow! Things that should've been white since December are still green, the locals are grumpy, and the Marmots are confused.

However, I've been having a brilliant time! Yes, it's fair to say I haven't become the skier I hoped I might, but I've managed to keep running a lot more than I thought I might, and have started doing some ski touring. Which brings me to the point of this little post... 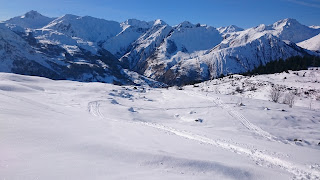 Ski touring is an awesome sport. It reminds me of a combination of running in the high mountains and road biking. For the unfamiliar, ski touring involves the use of skis with "skins" on the bottom, which grip one way and stick the other, allowing you to push them uphill. In combination with lightweight boots with a free heel and a pivot at the toe, we are now able to basically walk up the mountains, then remove the skins and lock our heels before skiing down. In summary...

- It takes place in beautiful locations
- It allows the participant to get away from the crowds and lifts normally involved in skiing
- It has an element of danger and possibility of death
- It involves the use of complicated, expensive and beautifully-engineered equipment

- And like any sport done properly, it allows the participant to use every ounce of energy they have and keep going until they collapse into a heap on the floor, should they choose to do so. Perfect.

Over the last few weeks I've had some fantastic times out on my touring skis, and have just upgraded my second hand 1980s gear to some lovely new Scott Superguide 88 skis and Cosmos boots, which immediately made me feel like a ski mountaineering hero. Thanks again Scott and Accelerate for continuing to support me! Today I completed my longest and greatest climb tour up to now, from St Martin to Meribel and then La Tania, and it's given me an idea for an epic adventure which I hope to have a crack at before the end of the season.