Being vaguely sensible for once.

February 25, 2016
There are a few reasons for this post... Firstly, it's been ages - though looking at most running blogs, most posts start with the immortal words "It's been a while since I've written anything", so that's maybe not a surprise! Secondly, I'm feeling slightly smug today after a great run out in the mountains around the Belleville valley. The reason I'm smug is that I, for once, was slightly sensible and turned back when the conditions told me to, rather than getting into the sort of situation I described here. Must be getting old.

As I've mentioned, Lorna and I are currently running a ski chalet in the Belleville valley. It's a fantastic place to live and work, but it is sometimes hard work and the days are often long, with running and skiing stuck in wherever possible. Thursday, however, is our day off, so inevitably this has become my "long run" day. A normal Thursday begins with a mental battle between taking the opportunity for a sleep-in vs. getting out to play, which the latter tends to win, then after some breakfast I head out for a run or ski tour while Lorna goes proper skiing. Then later we rendevous for beer and Fondue / Raclette / Other meatcheesebread dinner.


The weather often plays a part in the run vs ski decision, with running preferable on sunny days, but today I felt I wanted to run despite the fog which meant we couldn't even see across the valley this morning! We drove to St Martin and went our seperate ways. My plan was to run my well-worn route to le Chatelard then down to Villarenger, then to head across the valley where I've not been yet, with the aim of climbing to Pointe de Diallait (2045m), then descending the other side to drop back towards home. It was a great run, the recent rain had washed lots of snow off the tracks meaning that conditions were more like spring than February until above the summer village of La Gittaz (1496m). After that I was reduced to a run/walk for the climb to the last settlement at Lechaux (1613m). Above that I couldn't really see anything! Occasional breaks in the cloud showed the ridge I was climbing but other than that I just plodded on up, using my poles to test whether the snow in front of me was flat or about to disappear - if you've skied in "flat light" you'll know what I mean!

After threatening to clear a few times, at about 1950m the fog seemed to get even thicker and I began to think it might be sensible to call it a day. The combination of this and a tricky section (narrow ridge, with lots of holes and little slopes steep enough to avalanche) eventually persuaded me to turn around, leading to my current alive and smug status.

The alternative to running over the top wasn't bad either! I descended Pointe de Diallait exactly the same way as I'd climbed, through the little villages to St Martin, then back home over the other side of the valley. The final stats for today are 1600m ascent in 30km, not a long way for nearly 4 and a half hours but the climb has taken it's toll - my legs feel like they've done 50!

Finally, if anyone is interested, here's the kit I take with me on long runs in the alps...
In my little Scott backpack goes normal running stuff like map and compass, waterproofs, Buff, gloves, spare top and a couple of gels, but also an avalanche transceiver, ice axe, Kahtoola running crampons, SOL emergency bivvy, and a first aid kit. I took poles with me today too which were pretty useful. Today's run is on Strava here. 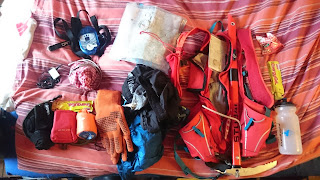 Right, the raclette is calling!