January 29, 2019
After last year's attempt, it seemed inevitable that I would have another go at a winter BG. I'd rectify all the mistakes I made last year: I'd take a spare torch rather than just more batteries, I'd do some recceing to make sure I knew the way, and I'd wait for the weather to be good. Yeah? 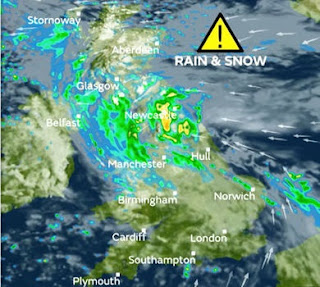 Well at least I did the spare torch one.

The weather looked a bit grim, and I definitely hadn't recced other than supporting the Dark Peak attempt in the summer, but this time I wouldn't be alone... I'd recruited the ridiculously young and ridiculously speedy Tom Saville to join me.

After lots of thinking, planning, shopping, and having taken a couple of days off work, we debated calling it off any doing something else, but on Thursday morning we finally decided to go and have a look. We'd call it a recce and see how far we got... Besides, we had far too much food not to go.

We were to be generously accomodated by Tom Partington and arrived just in time to dump all our kit in his living room before he got back from work. We wrote a few bearings on the map, faffed with some kit, drank tea and generally prepared ourselves. Oh and Tom did most of a Rubiks cube.

Just before 8 we left Tom's house and headed to the Moot Hall for the off. The weather was drizzly and on the assumption it wasn't going to improve as we climbed Skiddaw we decided to put waterproofs on before starting - best to do the faff before starting the clock. I wasn't really sure what to think. The glorious return to the BG after a year of improvement looked unlikely, and part of me wondered what the point in starting was, but over the afternoon my enthusiasm had gradually grown and I was optimistic. We really would just have to see what happened, but you never know...

Tom P was with us for the run out of Keswick and up to the bottom of the main climb up Skiddaw and it was nice to have his company as we jogged out of town. Tom S was enthusiastic and we ran at a decent BG pace. When the climb steepened Tom P left us and continued on his evening run, and Tom and I headed on up into the darkness.

I'd written on the map where we should roughly be each hour, but I deliberately hadn't brought a full schedule or written summit times for each hill. I knew the schedule was 1:29 for the summit of Skiddaw though, and we arrived with about 5 minutes to spare. The next section was one we knew might be rough and slow going. In places it was, but in some places it actually felt quite nice to run through the snow. I think I probably used more energy than I would've in the dry, but perhaps it was kinder on the body. Anyway, down and up to Great Calva in about 2:10, then down again and across the Caldew to climb Blencathra. This year I decided just to cross one river, rather than the full set I managed last year.

Blencathra arrived and we were still relatively unscathed, then came the descent. We'd been advised to look at Doddick Fell instead of Halls Fell Ridge, but neither of us had done Doddick before we we were a little dubious whether it would be safer. After taking a moment to find the summit we considered our options - the snow was not icy or hard, it was quite soft and almost slushy, and Halls Fell didn't look bad, so we went for it. 45 minutes later we were in Threlkeld. Tom had flown down the ridge like a little goat. I followed feeling like an old man... I was perfectly comfortable, just slow compared to Tom! In fact it took us a couple of minutes less this year than it took me last year...

So, while we're comparing to last year, let's have a look. Yes, it's time for a table:

The Threlkeld departure time this year is because we hid in the bus stop to sort out some clothes, food and torch batteries, but as the table clearly indicates (can you tell I'm at work?), we had already lost time climbing Calva and mostly climbing Blencathra. 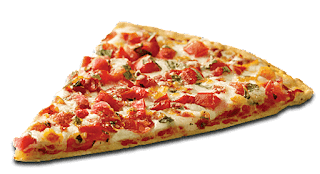 As we left Threlkeld Tom put in an epic performance, eating about four slices of frozen pizza as we plodded up the road and then onto the Clough Head climb. We weren't looking forward to this too much, we were now pretty soaked through and we realised that once we got onto the top of Clough Head the conditions would be relentless for most of leg 2. The joy of ridges...

We hit the summit after 5 and a half hours or so (pretty much exactly an hour down on last year), immediately felt the blast of an unforecasted wind, and resigned ourselves to living in our respective hoods for the next few hours.

The wind continued to pick up as we made our way along the Dodds, and the tough underfoot conditions meant we continued to slip very slightly further back on schedule. We were fighting the wind, but a quick discussion in a tiny patch of shelter revealed that neither of us were having very much fun, nor did we have many more clothes to put on, nor did the conditions look like they would improve. It was probably time to knock it on the head.

After Stybarrow Dodd we dropped off down Sticks pass, ran around the top of Thirlmere and eventually up the road into Keswick. We'd expected to feel much warmer once we got off the wind and down into the valley, but we were both still freezing by we got back to Tom's house, where we realised that every layer of clothing we both had on was soaked. I think it was probably a sensible option to call it a day when we did, perhaps we could've forced ourselves over to Dunmail but why? We were never going to get round in 24 hours and by stopping when we did there has been no break in training - I didn't run for the rest of Friday and took it easy over the weekend, but I haven't needed the planned week or more off.

It's always disappointing to fail, but we did set off with the plan to see what happened, and now we know. The BG will always be there! 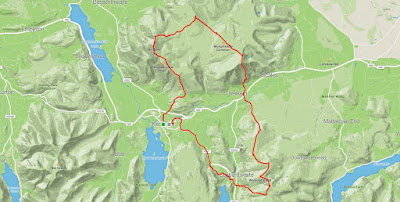 On the plus side, we had a couple of hours sleep, Tom sorted the rest of the Rubiks cube, and we were back home with weekend to spare!