This is a jolly special blog - it's specifically aimed at you ATR runners who are getting ready to tackle your first Ultra. Maybe you're reading this yourselves, or maybe Stu, Debs, Darryl or Lee are reading it out to you.
If so, I would like to request it is read in a big boomy Brian Blessed voice.

I'm sure that you don't actually need me to tell you any of this, as in those four people you have a great deal of experience and knowledge, but since I said I'd come then realised I'm away, it seemed rude not to participate. I'll try to keep it short and vaguely interesting. If you strongly disagree or have any really difficult questions please direct them to any (other) member of the panel.

FOOD:
I think this is one a lot of you are worried about, so let's deal with it first. Yes, food for running longer is different to what you might eat on a short run. There is no single answer that works for everyone or every race, but it's not too complicated. Here are three things:

1. How much to take?
Don't get too swept along by it being an ultra: If you run a marathon on 3 gels, forcing yourself to eat four Scotch eggs and a baked potato on a flat 30 miler won't do any favours. To get an idea of how much you'll need, think about the amount of stuff you would take with you for a long training run (say of half the distance of your race), then double it and add a bit.

2. Take a little bit too much. This will stop you worrying that you're going to run out and not eating when you need to. This may appear to disagree with point 1 about not stuffing yourself, but you don't have to eat it all.

3. What to take?
The absolutely most important thing is to take stuff you will want to eat. Take a mixture of flavours and textures so you don't get sick of one thing and stop eating. I take a mixture of chocolate bars, liquorice, fruit, boiled eggs, crisps, salted nuts, and gels. Test it out on your training runs and find out what you like - if you spent half your last long training run craving a banana omlette, take one with you next time. The mixture of sweet and savoury will also help by giving you some protein and carbohydrates as well as just sugar (I'm no expert on the science of this)

If you want examples, for a 30 miler like the Peakrunners 30, I ate something like 3 gels, two chocolate bars, and a medium-sized bag of nuts and dried fruit. In a ten hour race I'd expect to eat maybe 5 bars of some sort, a mini pork pie, an apple, a bag of crisps, more dried fruit and a couple of gels.


TRAINING:
I don't know how far off anyone's races are now, but I'm sure you're well into training for them already. I don't think I have a lot to add to this section really, since Stu is a highly qualified coach, and Debs, Lee and Darryl have years of experience.

As a mere FLiRF, I would just point out a few obvious things:

- Training for ultras is not just about lots and lots of long slow runs. These are important, but variation is good and helps avoid injury.

- If your muscles hurt after a long run, that's good. If something more acute hurts, or one bit hurts for a lot longer than the rest, you need to work out why. Give it a bit of rest and see what happens. If it continues, get it looked at... If only there was a running shop nearby with an attached performance centre with physios and that sort of thing.

- It's taken me a long time to accept, but core strength and running technique are worth working on. I do think we all run a little bit differently, but core weakness and bad technique tend to make the rest of you work so much harder just to keep going.

- If you'll be racing with a big rucksack, train with one.
- Ditto for poles
- Ditto at night


PREPARATION:
You can make your first Ultra a lot easier by doing a few simple things to prepare yourself. Things like...

Learn about the race. Are there feed stations? What food or drink will they have? If it's stuff you will like, factor this into your food calculations. If you're not sure, treat them as a bonus.

Kit lists - Lightweight kit is great, but if you think you might actually need it, check it will do the job it's supposed to. By all means take the tiniest pen and pencil you can if that's on the kit list, but however light they are, a useless waterproof or hat will be just that if you end up stuck on top of Crib Goch in a thunderstorm.

Sleep well the night before. This is more valuable than tweeting photos of your kit :)

Carb loading - we all have opinions on this. Mine is not to force a massive dinner down the night before, or a massive breakfast. Starting bloated is not a strong move. I eat a bit more in the week coming up to a big race then just a normal meal the night before. Again, stick with what feels right for you.

Taper. For longer than you think you need to.

Vaseline. Is your friend. Those little pots for your lips hardly weigh anything and if you suffer chafing in the middle of a race you'd wish you packed one. Just don't use it on your lips later.

Navigation. I'm not really the one to ask about this. If you see me, go the other way!
If your race requires navigation, get the route drawn on a map early and look at it as often as you can. Recce if possible. Write down important compass bearings. If you're going to be wearing a watch with an altimeter, consider noting some altitudes (but make sure you know the altitude at the start so you can calibrate accurately! https://www.freemaptools.com/elevation-finder.htm)

The golden rule which applies to all of these...
DON'T CHANGE THINGS ON RACE DAY!

Finally...
I've done all of these things wrong, as I am sure the rest of the panel have. At least I hope they have. Maybe it's just me. Anyway, I've started a race after two hours sleep in a multi-storey car park and a Christmas pudding for breakfast, worn brand new shoes from the box, not taken enough food, not taken enough water, overtrained, started injured, etc. etc.

None of these things are recommended. Leaving aside starting injured, none of these will make or break your race. If you get them wrong, you will be slower and less comfortable, but if you really want to run the race you will. At the risk of getting all philosophical on you, if it means enough to you, you will finish it, but it makes sense to be as prepared as you can be.


You're there to enjoy yourself - get out there and do it.
Good luck. 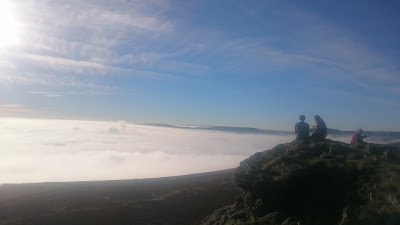 Secret final bit about PAIN.
So, your first Ultra. It's further than you've run before, so it's going to hurt. But you like running, so running more is better. You are probably in a beautiful place, and you are doing a really cool thing... Remember to enjoy it!