A week in the alps

April 04, 2017
A combination of work and adventures in plasterboard means it's taken me longer than intended to get round to writing this, but I wanted to write a quick piece on one of the best skiing holidays I've had in a long time.

The season didn't start well. Even compared to last year, when it didn't really snow till mid-January, the start to the season was bad. A March trip sounded like a bad idea, but frankly we needed as long as possible to save up, so March it was!

In fact, the snow was not a problem. We stayed at Le Praz, in the Courchevel valley at about 1300m. This worked brilliantly for me, as there was snow above us and sunny valley below us. I skied on Sunday but on Monday decided to take advantage of the weather and headed out for a long run. 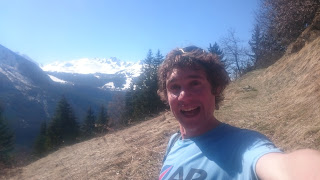 It was a great adventure, like the long runs I used to do on days off last winter. As then, the speed was low but the climb pretty high! I clocked almost 3000m in 45km, including one very snowy summit where I left a trail of blood in the sharp crusty snow! I forgot that ski socks can sometimes be useful. when running through this sort of stuff.

After a day's alpine ("proper") skiing on Tuesday, on Wednesday and Thursday I returned to another favourite from last winter: Ski touring. Courchevel was a great choice for me as it seems to be the most Ski-tourer-friendly resort in the area... There are marked trails from 1300 up to 1800m and to the Col de la Loze at 2300m, and lots of options to deviate on your way up. On Wednesday I did the shorter route with Lorna in the morning, and again on my own in the afternoon. The lack of snow did make itself known here, and made the trail tricky in places where there ground cover was more pinecones than snow...

The other advantage of Courchevel for the ski tourer are the weekly races, on the 500m and 1000m trails I mentioned. These start from Le Praz, so I really had no excuse to particpate. Sadly the 1000m race season had ended before our trip, but I had entered the final 500m race of the season, which would take place on Thursday evening. I had no expectation of the race, so made no special preparations. On Thursday morning I had a great skin up the 1000m course, then down into Meribel and back up to meet Lorna and the family in La Tania for lunch. It took me 1:16 to complete the vertical km, including a walk for the last few metres up to the top of the Col de la Loze!

At 6pm it was time to race. I was ready, I had Dark Peak vest on, my flowery tights pulled up high and my Sombrero tight under my chin. The last minute addition of a cape was a masterstroke by Lorna. It was a fancy dress race, by the way... 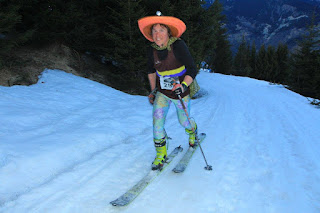 350 of us set off up the hill. The race was brutal despite the jovial atmosphere at the start. The guys at the front would attempt to finish the course in under 25 minutes so set off with a running motion I have yet to master. I hoped for a sub-40 minute time, so positioned myself in the middle of the main group, just ahead of a character from Avatar and behind some sort of Christmas Elf.

The Sombrero was not as restrictive as I thought it might be, and I soon forgot I was wearing it as I tried not to stand on anyone else's skis or stab them with my poles, at the same time trying to avoid being on the receiving end of a similar experience. The area of mostly pinecones from the previous day had expanded further, and as we all gingerly crossed it I was reminded of crossing a cattle grid during a fell race. I eventually reached the top of the course, with only a 50m descent to the finish line. However, skins are great for climbing but not so good for descending, and I lost four places in this section. I think those who passed me had race skis and skins, meaning that their skins were not the full length of their skis, so by sitting back they were able to ski "normally".

Still, it turned out I was 47th of 350 in a time of 36 minutes something. I'm pretty happy with that for my first Ski race since drunkenly hurling myself down a slalom course at Sheffield Ski Village about 10 years ago! That was in fancy dress too...

On Friday I headed out for another great run, and before we knew it it was time to head to Geneva, Manchester, then home.

So there we have it, a fantastic week, and proof that a skiing holiday can actually be three holidays in one! Family holiday, running retreat, and race trip. Now, where can I get some of those race skis before next December..?!

Post script:
In response to some comments made on a blog I wrote on the Runners against Rubbish blog, I've recently been reading about the environmental effects of the Ski industry, and I know it's not necessarily as cuddly and environmentally positive as as it appears. However, without digressing too much from the point of this blog, skiing does have a number of advantages in environmental education, health, and jobs, and is a massive part of life in the Alps. As with many negative human influences on the environment, it's not going to go away, so we must do the best we can to reduce its impact.

But this blog isn't about all that, it's about running and skiing and racing and having fun and that sort of thing.
2017 Alps France mountains Racing Ski Touring Skiing