March 06, 2015
So, after a bit of a last minute invitation I ended up in the Caribbean last week! I joined a yacht called Spirit of Juno to take part in the RORC Caribbean 600 race, a 600-ish mile journey around the beautiful Caribbean islands, starting and finishing in Antigua.

I flew out on Thursday for a few days of training and preparation before the start of the race on Monday... Having not really sailed since the Fastnet in 2011 (the 3 Peaks last year doesn't really count since I was a runner not a sailor!) this was definitely useful for me. When I arrived, most of the crew were already there so we had a quick introduction and got started sailing. It was also a good opportunity to wander around the marinas and see the other boats - Antigua is one of the world's few gathering places of the lesser-spotted super yacht, boats like the incredible 203ft Athos: 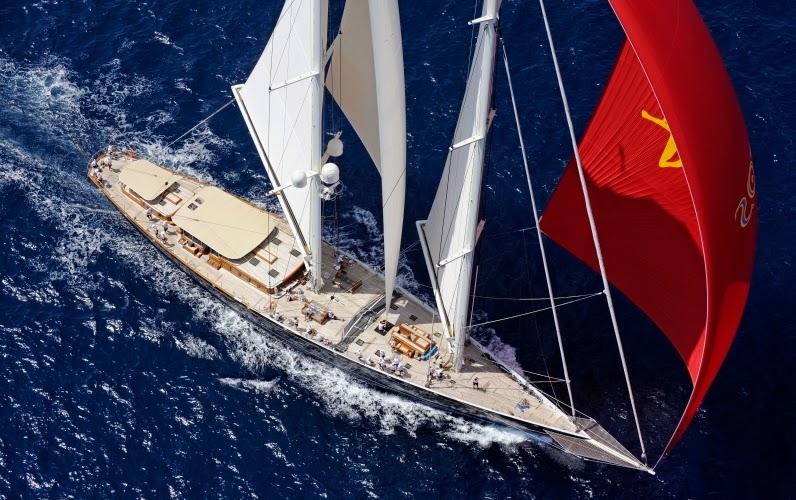 The rest of the crew were mostly very experienced sailors, so I ended up taking on the role of engineer... The boat was originally built to race around the world so is designed to take all sorts of weather, but she's a bit old and needed a bit of attention. Which was actually good, as it meant I could contribute something!

Monday came round quickly and we spent an hour or so setting ourselves up to cross the line as close as possible to the 11 o'clock start time. Then we were off! As I remember from the Fastnet, the start was chaotic and exciting. Yacht racing sounds quite sedate, but at the start of races huge boats often pass within metres of each other - there is something about so many huge (and hugely expensive) objects passing so close to each other that gets the heart rate going. 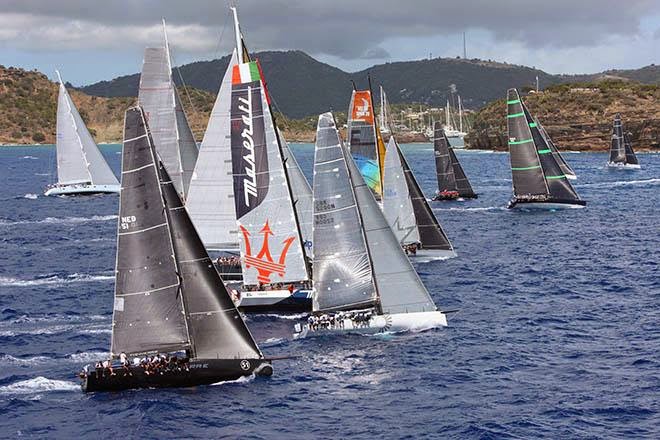 After a while, the race settled down and we were on our own somewhere in the middle of the fleet. The weather was as I'd expected and basically we were now having a lovely time. I wasn't involved in the navigation so I don't know the precise details, but we did take slightly wider lines around some of the islands than other boats in the hope of avoiding "wind shadow" close to land. Into the first night we started the watch system, whereby the crew of 16 split into two watches of 7 people each, with the skipper and navigator left free to be awake at critical moments. Watches would change every 4 hours during the night and every 5 hours during the night. 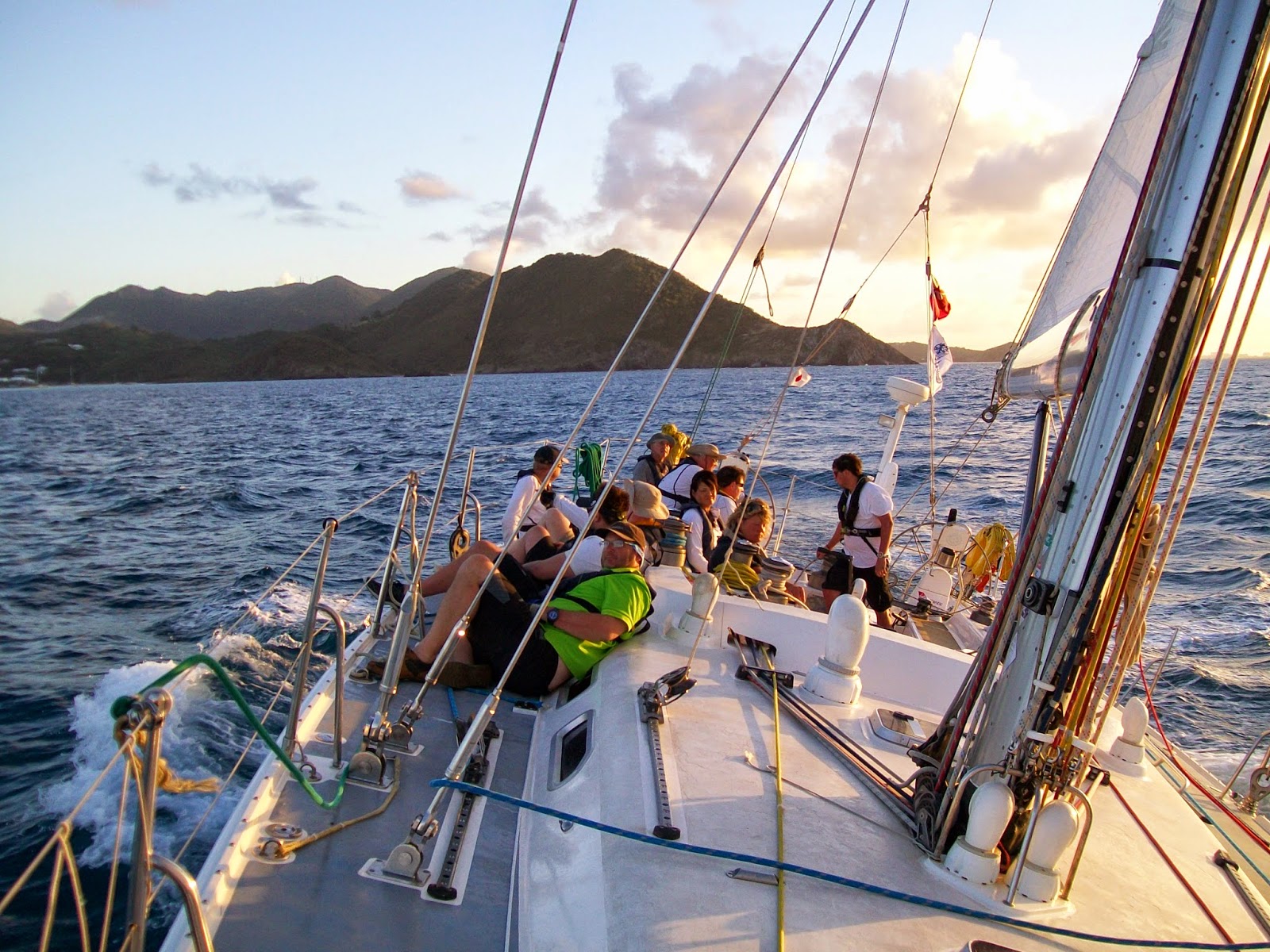 However, after my first watch, which had passed without too much happening, the first engineering problem arose... The battery was running down very quickly and was already too low, and the generator wasn't charging it. The battery is crucial as had to have the safety lights on to qualify for the race.

It soon became apparent that the alternator pulley had partly sheared off; we tried tightening the belt to force it to stay on but this only resulted in smoke (and panic from the rest of the crew!). The problem meant we'd be without power in hours at our current usage, so as it got dark we turned everything other than the nav lights off and tried to work out what to do.

By the second morning I was back on watch, and had another look at the batteries. By following and labelling all the cables I was eventually led back to the engine (instead of the generator) where we found an original alternator, which had been used to charge the batteries before the generator was installed. Boom! We connected it, started the engine and stared at the monitor... Back in business.

Despite the power problems (and a few others, like tearing a huge spinaker sail right down the middle) we were racing along well and heading towards possibly the trickiest part of the course, the section south of Guadaloupe. The islands we passed were all stunning but this part of the course was particularly memorable, with huge cliffs rising from the sea. 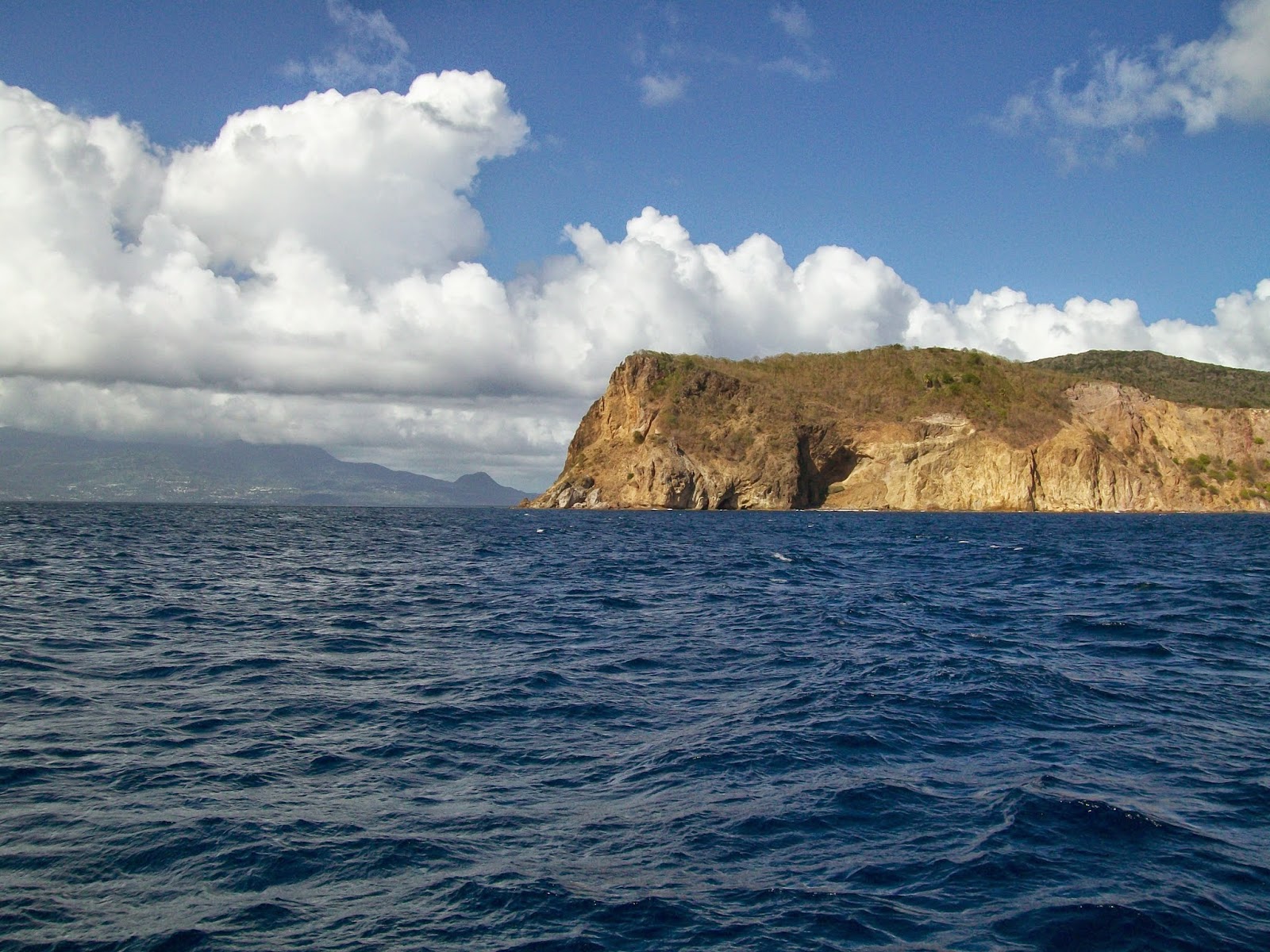 Around the base of the island there is a well-known area of light winds: Boats in previous years have spent hours and even days bobbing around this area waiting for the wind to return! We were quite lucky and managed to get through without ever actually stopping... Our speed dropped down to below 1 knot (our maximum in the race was 14) but before too long we were out and on our way back to Antigua. Spirit of Juno was doing well: Showing her age and needing a bit of TLC to keep her going, but this suited me perfectly as it was just the right amount to keep me occupied!

After this section we started seeing more other boats again. On the long way back up we passed, then were re-passed by two boats in their own little battle: Scarlet Oyster and EH01. They were in a different category to us but we still enjoyed having someone to race and the battle lasted right to the end! On Wednesday night we passed the volcanic island of Montserrant, though sadly it was dark so there wasn't a lot to see.

By Thursday morning we felt like we were on the home straight... It looked like we'd finish sometime that evening, and as the day past the watch system drifted slightly as crew decided just to stay up till the end. The last day was great, we were racing Scarlet and EHO1 all day and Spirit of Juno was sailing well in the conditions. After the race we discovered that the last 36 hours had been by far our best of the race, we'd been one of the quickest of our class and had overtaken lots of boats.

At the end of the Fastnet race a few years ago I had the honour of being mistaken for a rolled up sail on the foredeck during a very tense finish. This time round I remained human, but the finish was even more tense... We were still racing SO and EHO1, tacking in and out of each other's path close enough to see the other crews sitting on the edge of the other boats!


As we approached the final mark everyone was on deck and things did all get a bit tense, with lots of shouting, but we squeezed ourselves between EH01 and Scarlet Oyster and across the finishline... The shouting turned to cheering and it was all over! We dropped the sails, started the engine and headed for the marina.

Once the boat was parked the shore party arrived - mostly made up of wives/husbands/girlfriends of crew, but also representatives from the race organisers RORC, who brought us a welcome crate of beer. This set the tone for the evening as we celebrated both the race finish and my watch colleague JC's birthday long into the night!

The race took us 3 days 9 hours. The outright winners were the incredible racing trimiran Phaedo3, which set a new course record of 2 days 18 hours, though this is the handicap time: they actually sailed round in 1 day 9 hours! 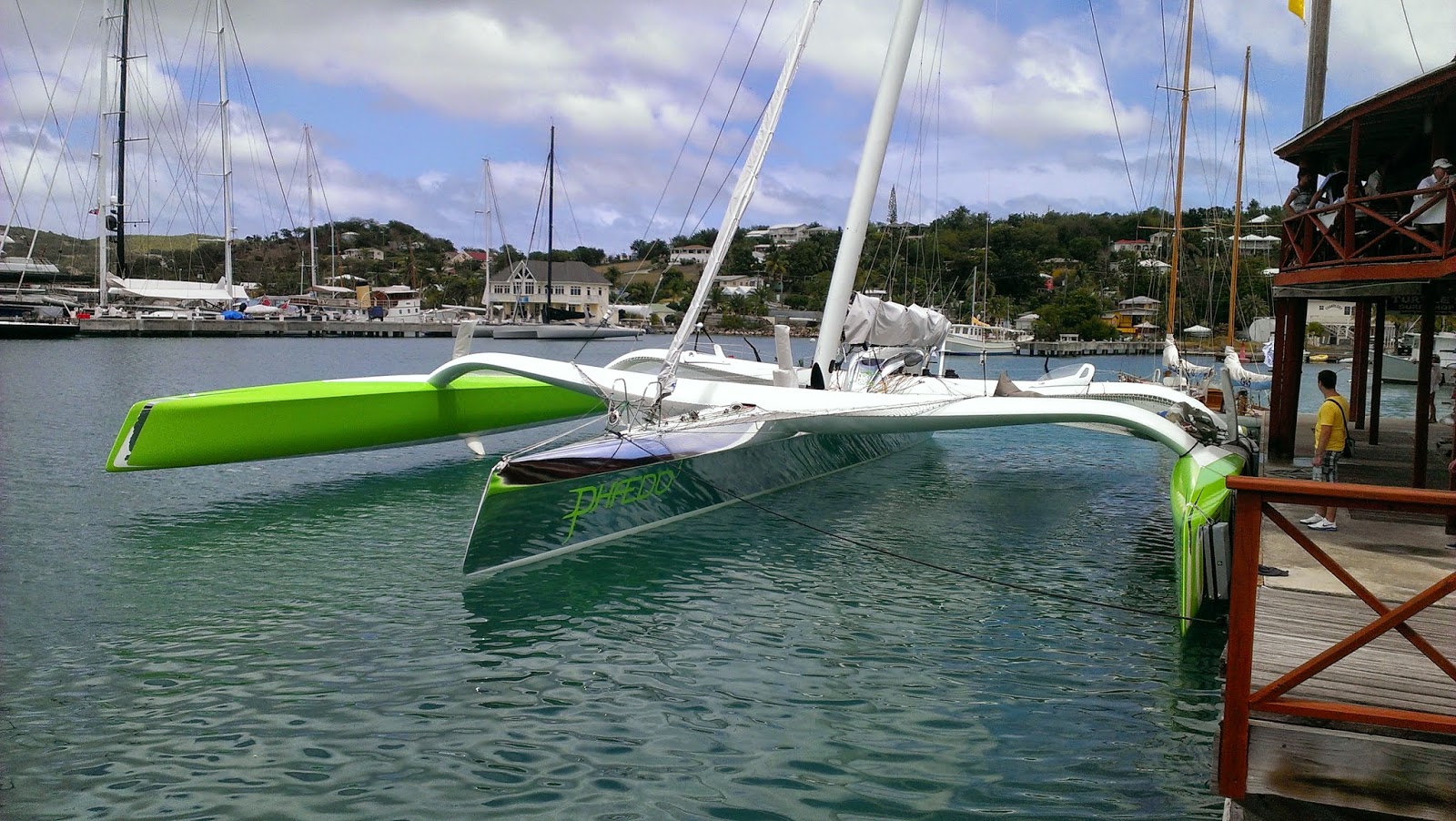 After the race I had a few days to explore Antigua, which predictably I did mostly on foot! The island is a beautiful place, with things you might expect like beaches, rastas and brightly coloured shacks, but also things you might not, like rainforest and even some reasonable hills. One evening I ran up to the ruined monastery on top of Monk's Hill, and another up to the highest point on the island, at 402m: Mount Obama (though it used to be called "Boggy Peak", which sounds like a good Peak District name!). The view from Monk's Hill was quite amazing:

As well as spending my days running around and drinking rum with my crewmates (Yaaaaar!), I also did a bit of kayaking around the harbour (a great way to get up close to the superyachts), and explored the colonial history at Nelson's Dockyard. Antigua is a really interesting place, though I found the contrast between the luxury yachts at one end of the island and the obvious poverty at the other end a little bit arkward. The people are fantastic, and the pace of life is infectious... I could get used to being an engineer if this is what it's like! 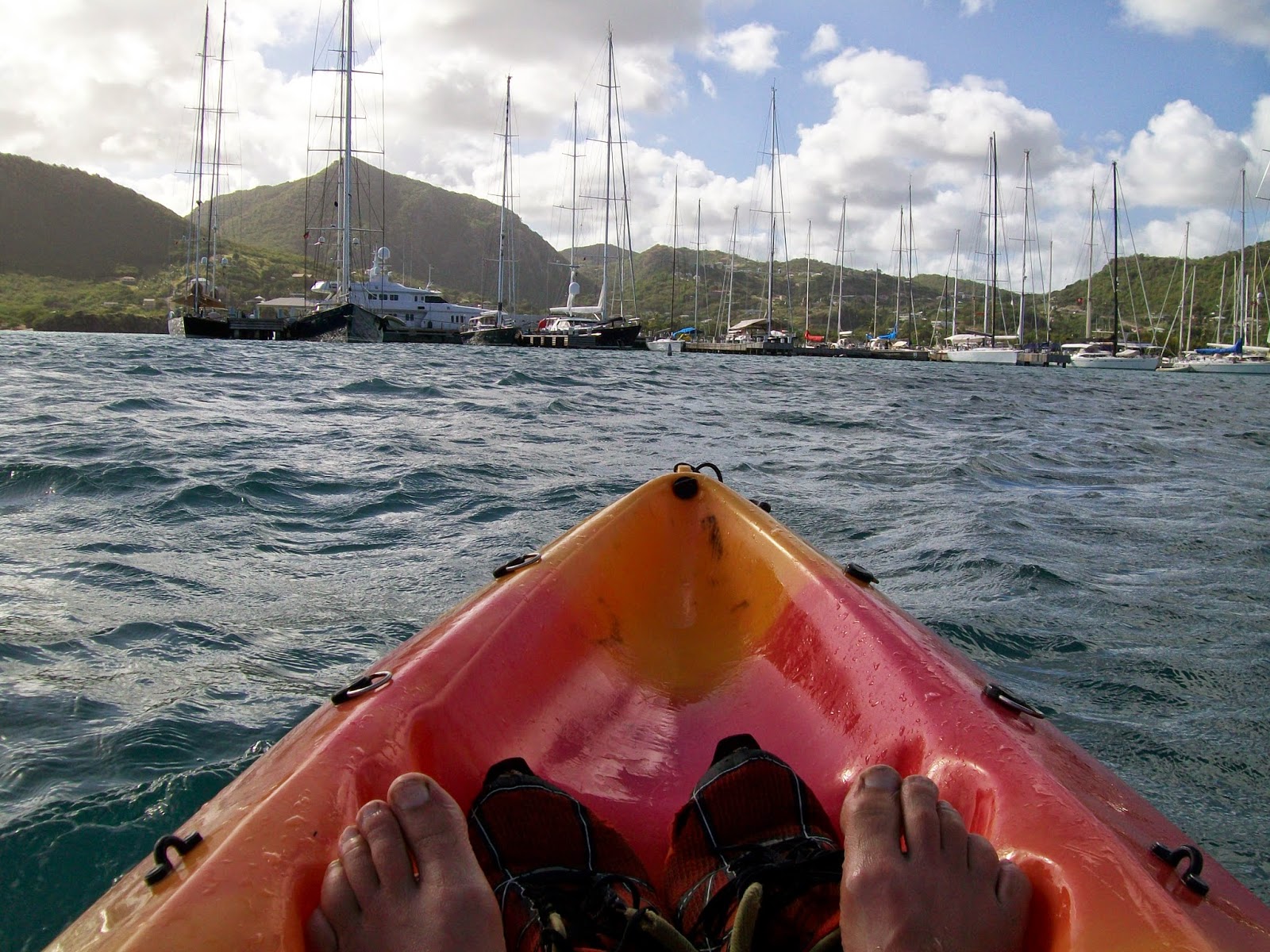 So, till next time, take it eeeeeeeeasy...