January 26, 2014
Last year Jim Mann and I raced in the Marmot Dark Mountains overnight mountain marathon, which was a fantastic event based at Muncaster Castle in the Lake District. The race was great fun, but the result (DNF due to missing a control we couldn't find) was not ideal - full story here. This year the event was based in Glossop in the Peak District, so it would've been rude not to have another go!

The weather on Saturday morning was good, cold but bright and sunny - perfect for a long overnight bogtrot. Sadly by the time Jim arrived in Sheffield it was raining and blowing a gale, having recently finished hailing. We packed our kit, drank some coffee and planned our navigational strategy. This was simple: We would run slowly, study the map carefully and think about our route choices well (the emphasis is for my own purposes...). With this strategy firmly imprinted on our minds we headed over to Glossop.

Lots of fast teams had entered the race this year, including Steve Birkinshaw and Tom Gibbs. I've met Tom a couple of times through Adventure Racing and his team finished joint 3rd at the World Champs in December. Steve won the Dragon's back last year and is I think some sort of international orienteer. Either way, they were probably going to win the race. Chris Near and Tim Higginbottom were another fast team but were unable to attend. Lucy Harris and Bruce Duncan representing Haglofs were expected to be the fastest mixed team, and probably to mix it with the leaders overall too. Jim and I were described by Ian Corless as being "not renowned as a strong navigation team but they are fast."


We essentially met this expectation! We enjoyed ourselves and ran fast, but our navigation relative to others was slow and we made a few mistakes, including one big one: We mis-punched, using a control box from another course instead of our own at CP19. This means that we are classified as "Did not finish" - DNF.

Monday Morning update:
I've just had a very quick look at our splits vs. Tom and Steve, and the results are interesting. On most legs we lost a couple of minutes, though Jim and I actually had the fastest splits of the race on four legs (sections, nothing to do with a Pantomime horse). However, what stands out is the legs where we lost lots: 57 minutes to CP6, 25 minutes each on the way to 2, 7, and 10, and 15 minutes on the way to 8, 9, 14 and 16. All as far as I can tell are due to tricky navigation at the end of the leg - finding the way into the control from the attack point. I guess that's our homework then...

Many Thanks to Jim for a great race, and to race organiser Shane Ohly, Dave Taylor, and the brilliant marshals and staff.

THE RACE - The long and boring details...

Disclaimer: Any regular readers of this blog (?!) will know I don't always remember race details very well, so apologies to the relevant people for any errors contained herewith.

Disclaimer 2: Whilst writing this blog I have fallen asleep a number of times, so please forgive any spelling or other mistakes!

At 20:03 we were off, heading up a track to CP1. Even before the end of the compulsory track we had a little trouble and lost a few minutes trying to climb the wrong stream. We stopped the mistake pretty quickly though and got ourselves back on track, finding the first control after 35 minutes or so. Mistake count: One (small-ish).

Next, a track south east to join the Pennine Way, over the road crossing and into CP2. The first bit went well and we reached the road crossing without trouble. From there things unravelled a bit and we lost a fair bit of time, taking nearly another hour for around 4km!

The next few legs were interesting - CP3 had been taken out of the course, so we needed to head straight for CP4. We decided the best way to do this would be to aim for CP5, then bypass is to CP4, and back out to 5. Broadly this went well, but we struggled to find both controls for a while and it was 10:30 in the evening before we set off to CP6. 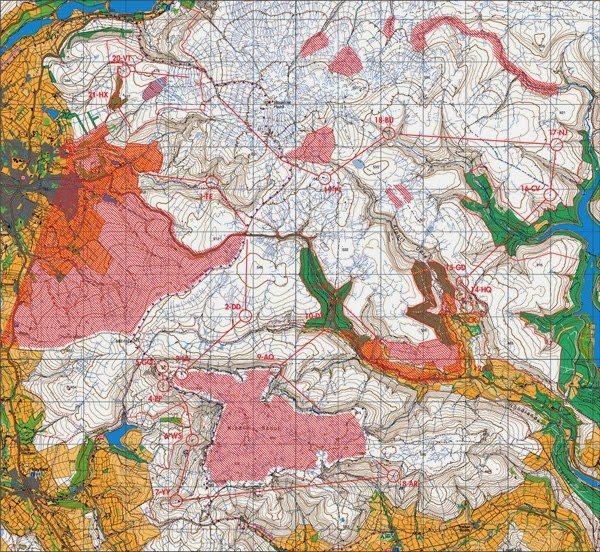 Ah yes, CP6. Here Jim and I decided that some hill reps were a good idea, so we went up and down, looking for the crag from above, below, and from two different stream junctions! Eventually we got it... Mistake count is something like five by now, but we're having fun!

Relative to the previous leg, 6 to 7 went OK, but it still took us a while to find the second crag. As always, finding the attack point and route into the checkpoint was the tricky bit. In contrast, the next leg was three times longer, and took less than double the time. Our run to CP8 was pretty good, we were now on paths I had run and raced on loads of times which didn't necessarily help us, but did give me a certain confidence! It had now taken us six hours to complete 8 checkpoints... 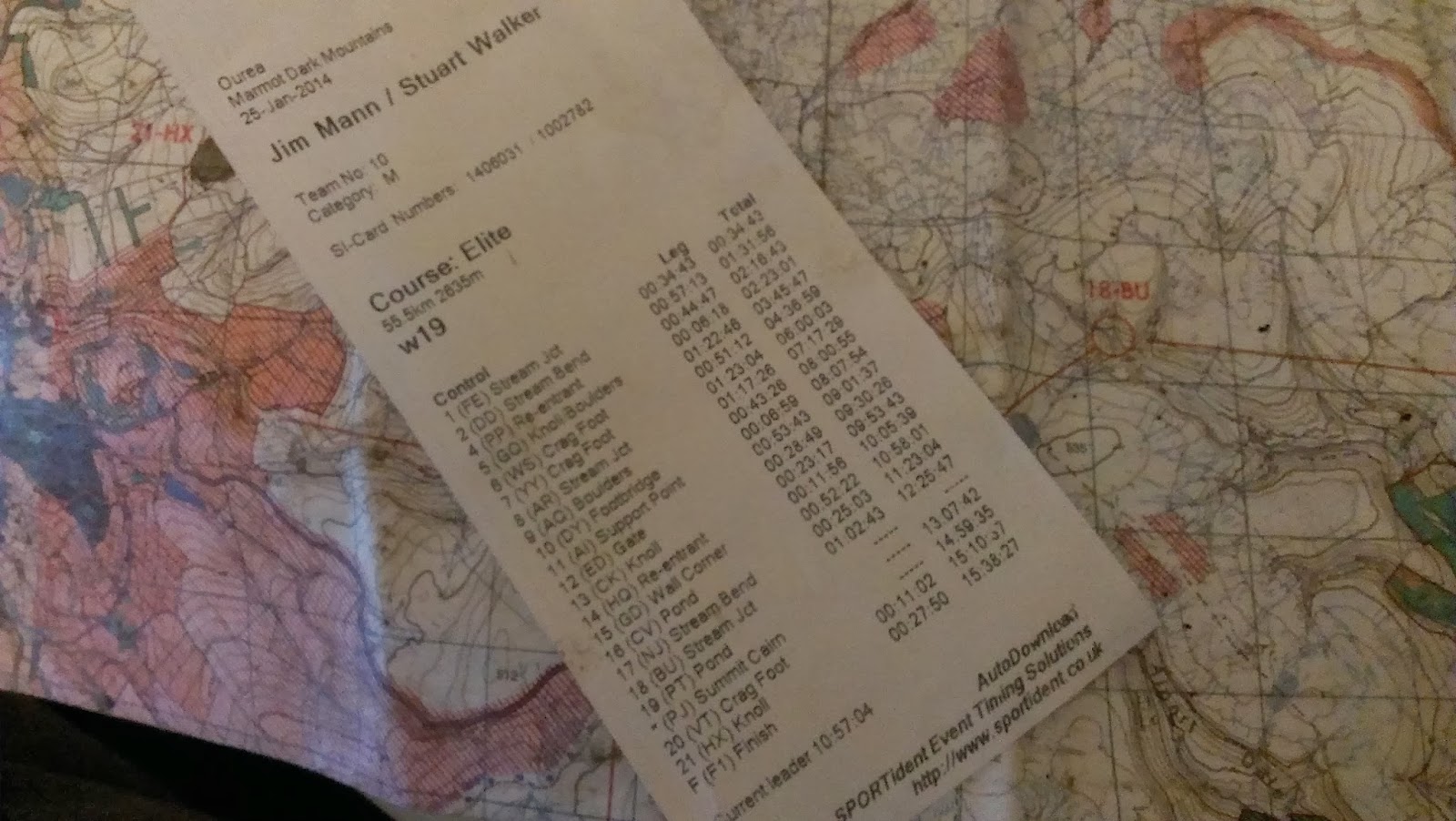 The next eight controls went quite well though, talking with Jim afterwards we now felt that we had settled into the nav and were working well. We took a nice line around the edge of the out-of-bounds area into CP9, then a very direct line to 10. We overshot to the East slightly and had to run back along a track and cross the river. Around this time my stomach was starting to feel a bit dodgy and we were both on the limit of being too cold, but overall we were doing well and enjoying ourselves. At the midway control at CP11 we met some of the race staff who were very friendly, then headed off to join a track through another out-of-bounds area to CP12. We were tired on the climb up to CP13 but found the Knoll relatively easily. Next, CP14 was very close by and in a re-entrant on the edge of a Knoll. It took a little while and a few more hill reps but we got it 20 minutes or so after CP13. The next control was easily found as we'd already seen it while looking for CP14!

From 15 we plodded along the edge of the reservoir then climbed up to the little pond. We did this by leaving a gap between us and gradually making our way uphill while shining lights around. It worked and we were on our way to 17... getting there now! Around this time the weather started to get pretty horrible, and we started to see the first suggestion of daylight. It was cold, and after gaining CP17 and after a long drag CP18 we decided it was time to put our Primaloft warm jackets on. This meant taking waterproofs off and necessitated a stop for a couple of minutes. It would be freezing but needed doing, we were now seriously cold and were both starting to wonder if it was time to get out the emergency bothy bag. We also decided to run as hard as possible from now on to keep ourselves warm - with jackets on we were only just warm enough for the rest of the race!

After stopping before CP19 to put jackets on things really went wrong. Unfortunately we hadn't realised until after the finish, but we had missed the small pond we were looking for, and found a similar one a few hundred metres south. This meant that we actually dibbed the wrong box, hence our control would not count and as soon as we dibbed again we would be disqualified.

Oblivious to all of this, we joined the Pennine Way and made our way along the long leg to CP20 and 21, both of which we found relatively easily... Maybe we can navigate after all! Flushed with success we headed down to the finish and dibbed to complete the race. We expected to probably be last, and were given the finish time of 15:38:27. The checkpoint staff were again brilliant and made us hot drinks with biscuts before we headed back to the event centre.

So, another fantastic race, good running, but navigation still needs work... The winners of the Elite course were indeed Tom and Steve, and Lucy and Bruce had a great run to finish second.