April 13, 2013
Last night I had a great run out to Hathersage with Wil, Lucy, Joe and Zanthe. We were joined by some other ShUOC guys at the pub for dinner, I was brave and did not give in to the lure of the Cumberland sausage. My bravery was rewarded, they took a long time to come but the ribs were fantastic!

Today I knew that, according to the schedule, I would be doing 3 hours of running at 8 minute miles. After a bit of breakfast I started thinking about where to run... It seemed I had run along the edge path from Crosspool out to Lodge Moor every day for the last month (not quite, but I do run it very often!) and though its a great route I fancied something different. Then I remembered the Dark Peak Loxley 5 Trigs... A 22ish mile route around Loxley, which links 5 trigs together. Tom Westgate and Willy Kitchen had told me about it at the Winter Mondays and it sounded like a great little route.

The rules state that you can start anywhere, as long as you finish there too, and that the five trigs can be visited in any order. I started at Loxley Nature Reserve car park, close to the first trig.Off I went, 1 minute later I ticked off the first trig (Loxley) and turned around, back through the car park and off across the golf course... 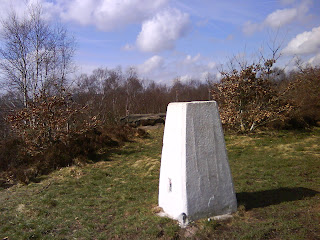 The paths are good from here out to Holdworth, then a quick road section took me to the edge of the farm area which leads to the Onesmoor Trig. I took a longer route around here than planned as I didn't want to plod across the crops, and got there 27 mins after starting. 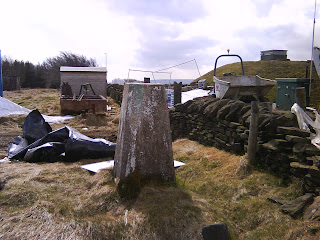 From here I dropped down the lovely track into High Bradfield, past the church and continued down to the edge of Agden Reservoir. I skirted around the north side of the res and followed it to the end. Here I missed my turning off and ended up going a few hundred metres back up the wrong side of Agden which meant the same distance more on the road, but I got back on track and crossed the road to head up the shooting track to Emlin (1:01)... 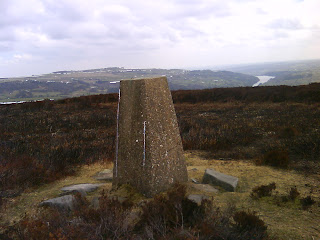 From Emlin began the section I reckoned would be the crux of the run, the long leg between Emlin and Back Tor. I set off from Emlin on a bearing to Cartledge rocks, over the hardest terrain on the route. There was still some snow but overall it was in good condition and it didn't seem too long till I was on the good path up to Back Tor. I clambered up to the trig at 1:32. 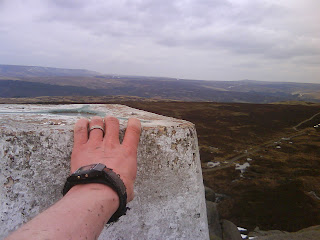 At Back Tor I was feeling confident, I wasn't certain but thought the record for the route was Tom Westgate's 2:59. With four trigs done in about half the time I felt good as I dropped down to Strines. I sneaked across the dam wall though probably lost any advantage by having to plod back up to the track on the other side. But a quick map check revealed that the trigs weren't evenly spaced and I would have to really crack on if I wanted to beat Tom's time.

I ate my last jelly snake and set off up Lodge Moor towards Moscar. My line wasn't great and I climbed more than necessary but eventually reached the road / track into Crawshaw Head. Another little bit of road and I was at the big house under the Rod Moor trig. Another little trespass and the final trig ticked at 2:23. This photo looks like an afterthought because it was, I was starting to panic now! 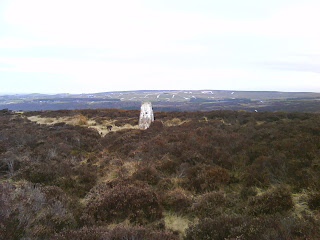 At the trig I had a change of plan and decided to return to Loxley by going north off the top and around Damflask reservoir. The descent from the trig was boggy but reasonably quick, though a little more fence-jumping was involved (not dry stone walls though!). From the end of Damflask I really needed to charge if I was going to stand any chance of making it. I had a flat run east and a climb north to do, but could climb either the road right at the end or the footpath halfway along... The ethos of these things is to avoid road where possible so I took the path up past Loxley House, with something like 10 minutes to go.

At the top of the path I had seven minutes or so to go and flogged myself till I crossed Long Lane... Not far now, another 50m climb and into the car park. I finally got back to the gate I had started from at 2:57:23. The Loxley 5 trigs is a really nice route, I enjoyed it a lot and was pleased to be able to navigate myself round it with relatively few mistakes. It was also suitably knackering for a hard Saturday run! 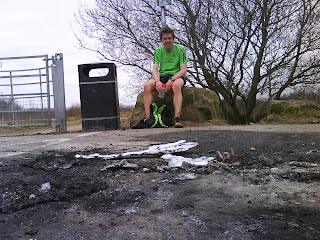 Here's the route I took. The highlighted parts are where I intended to go, the biro is where I actually went in the places where it's different (mainly last section). 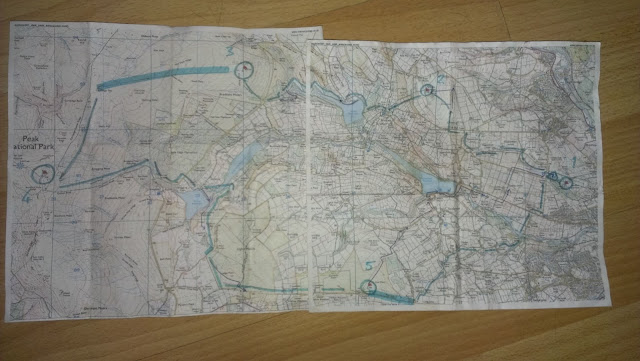 Finally, I read last night about an incredible adventure undertaken by Ben Bardsey and Jon Morgan, with a couple of other guys, out in the Alps. The full write-up is on Ben's blog here and is thoroughly recommended.