December 23, 2012
Yesterday was the Tour of Helvellyn, a fantastic "low-key" ultra organised by Joe Faulkner and Nav4 events... I did this race last year and despite a disappointing run it was a really nice way to end the year! So I was looking forward to doing it again, though the weather was not quite as nice and Alpine - more torrential rain and windy.

I stayed overnight in the van in Askham village hall car park, the rain got steadily heavier during the night but by 8am it was at least daylight! It was good to catch up with Jim Mann and others at the start, and four of us (myself, Jim, Fraser and Chris) decided to set off together. When we did so there was only one man left in the hall. As you might expect, it was a certain Mr. Collison, lurking ominously and looking in no hurry to set off. The twittersphere had been flickering away the previous night, with Kim and Tom Gibbs highlighted as favourites.

The route was basically a lollipop - Askham to Howtown, to Patterdale, up and over Sticks Pass, along the edge of Thirlmere, then up past Grizedale tarn back to Patterdale, Howtown, and home. 38 miles in all.

The four of us set off at about 8:40, and by about 8:45 we were plodding through gorse bushes to rejoin the proper route... Another ten minutes later I had pulled away a bit from Jim, who was also a bit ahead of Chris and Fraser. Then, again, I took us the wrong way and stayed too high above the edge of the lake. This was very frustrating and I vowed to concentrate more from now on. I think I'd got too carried away with trying to get away from the guys, but this mistake lost me about 10 minutes, which would be crucial later.

Anyway, eventually we got sorted and Jim and I rejoined the proper route. As we headed towards the Howtown checkpoint Kim started to catch us. I decided that when he did so I would try to stick with him for as long as possible, though I didn't imagine that this would be long!

After the Howtown checkpoint we headed up to Patterdale. It was pretty wet and as we climbed up to Boredale Hause, Kim got away somewhere up here and I reached the checkpoint on my own. I said hello to Joe, grabbed a quick slice of Banana and continued towards Glenridding, it was good to see John Vernon as I ran along the road. From here began the major climb of the race up to Sticks Pass. As we passed the Ski Centre and started the major part of the climb I spotted Kim in the distance, which was a surprise! The climb was wet to say the least... 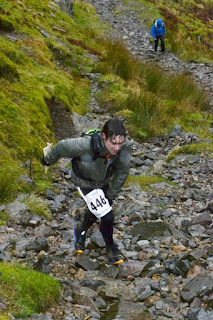 Looking damp... Thanks to @stustod for the Photo!

After the top of Sticks Pass we descended to the bridge at Stannah. I think I caught Kim again on the way down here, and was even in front for a second or two. Then the slippery grass and my shoes landed my on my bum again and off he went... THEN I did another silly thing and overshot the checkpoint, reaching the road before I realised my mistake. So I got a bit angry with myself again, clambered back up, dibbed and headed off towards CP6 at Swirls. At the checkpoint further chaos until I found the route through the woods, but eventually I did. I remember reading Kim's blog from last year describing this as "a long drag to Dunmail" and that's how it felt, especially when I made the same mistake as last year and dropped too low. I will have to recce this section next year!

I was feeling a bit rubbish when I got to the checkpoint at Dunmail, then as I started the steep horrible climb I spotted a familiar pair of three-quarter tights - despite my various time losses I had somehow caught Kim! As we climbed I got closer and at Grizedale Tarn three of us were together. The top was cold and I was grateful when the path started to descend down the beck. Eventually we were back to Patterdale, so all we had to do was run back through Howtown to the finish... 8 miles or so.

Somehow retracing my steps felt easier, the climb up to Boredale was tough but eventually it passed and headed down to Ullswater. I was a little surprised to still be running with Kim and cursed myself a bit for my mistake at the beginning, wondering what might have been... But I was happy to be running well and getting there... The final plod over the moors from Bonscale felt slow but eventually we passed the Cockpit stones, over the main bridleway, through the area of the gorse-based disaster a few hours earlier and onto the road. Kim was trying to get under 6 hours so the speed increased as the time got close - I nearly gave up and jogged in but kept going and was pleased to finish with Kim.

I was a bit disappointed when we arrived and realised that someone was already there, Ed Catmur had come in a few minutes before us, with a time of 6:05, which pushed me down to third. I'd like to say that if I knew Ed's time I would've run quicker and there were times when I thought I could, but I would've been slower at the end on my own so maybe the time would've been the same anyway!

Still, a fantastic race again this year, thank you to all the marshals who can't have had fun standing out in the rain for hours, and thanks Nav4 for organising a great race. Well done Kim, Ed and everyone else! Here are the first 45 or so results (Cheers @oliblom)... 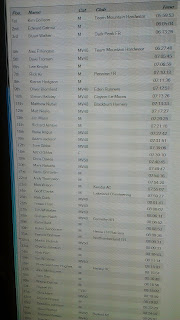 Now that's done it must be Christmas, so have a good one everyone and see you next year!