The final Open5 of the season...

April 04, 2012
Well as my shorts and T-shirt from the weekend hang covered in snow on the washing line, the beautiful weather we had in Dovedale on Sunday seems a long way away!
I'll keep this blog pretty short because I have no pictures to make it interesting, but for once I had a reasonable (if not brilliant) Open 5. I decided to bike first, and really enjoyed the bike course. It wasn't too technical which suited me, and there were a fair few controls accessible by road and decent bridleways, which made it pretty fast. After getting all of the high point controls in a loop I found myself over at the eastern end of the map, so decided to crack on and clear a course for the first time!
Having done all the bike I got back to transition after about 3:40, so set off for a pretty short run. For once I was sensible, and just collected to controls on the top half of the map... As usual, there was a strong urge to head off to the most obscure, difficult and low scoring controls in the bottom corner, but for once I managed to resist! Towards the end I messed up a bit, ending up going to control 8, then 5, then back to 8 for no good reason, but found a bit of energy towards the end and made it back in 4 hours 57, with 515 points. This was good enough for 10th place on the day, with the same points but a slower time than 8th and 9th.
So I finished the series on a relative high, and pulled my overall position up to 26th despite a shocking result in the Quantocks! Congratulations to Lucy for second place on the day and overall in the series (blog). 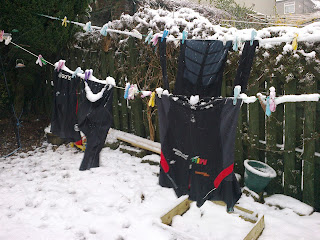