March 13, 2012
Saturday was the first race in the 2012 Runfurther ultra series. After the HPM, this always feels like the start of the year for me. I had recovered pretty well from the previous weekend, although my stomach took a day or two to finally sort itself out...

I left home at about 5, having had a small breakfast (I think early breakfast might be a key to sorting these stomach troubles) and arrived at Haworth in plenty of time. Before the start I felt pretty fit, so decided I would run fast but comfortably, and see what happened. On the start line the weather was certainly not as promised! Light drizzle made it chilly in shorts and a long sleeved top, which was all I had brought as a sunny day had been forecast. The start took us all by surprise and there was plenty of barging as we trotted out of the village on the road. Just as we turned off onto the track I found myself at the front and pushed on a little bit, after a while looking back to see that three of us had moved away from a larger group - Jim Mann, Jason Stevens and I. Woohoo - it was going as planned!
The three of us had a good run over Bronte Bridge and up around Top Withins, although I couldn't have gone any faster over the slippery slabs, and had a couple of little mishaps! We stayed together to the checkpoint at Long Causeway (13 miles), and just after that I slipped back slightly as I was having stomach problems AGAIN (boo!). Shortly after this checkpoint I had stopped to check the map and Duncan Harris came past looking very strong, leaving Jim and I in 3rd / 4th.
We made our way towards the checkpoint at Makinholes Youth Hostel, but just before reaching the check we were overtaken by a big group of people, who had taken a better route than us. We were really disappointed as this put us back to around 10th place, so much so that Jim had a shot of Jura at the checkpoint! By this point my stomach was feeling ruuuubbish, so despite wanting to catch up with this group I bit the bullet and jumped over a wall for a few minutes.
Feeling refreshed I headed up Stoodley Pike. For some reason I like this hill, and took a good route to the top. This meant that I did catch up with Jim and the group who passed us at the top. I was pleased to be feeling good again and headed off down the hill towards the front of the group (now about 7 of us). We eventually made it to the road down into Hebden Bridge, which was very painful on the shins! After dipping into the village the route heads up again towards Heptonstall. At this point a few of us pushed on from the front of the group. Myself and Jim Rogers ran up the hill to the Heptonstall checkpoint well, which got us a decent gap.
Towards the end I started feeling pretty good again. I pulled away from Jim Rogers slightly but we were both caught by Jim Mann. I stuck with Jim so we were again 3rd and 4th as we passed through the last checkpoint. We kept the pace up and pulled away again from the group. Jim asked me whether I wanted to race it out or run in together... I thought he was stronger than me at the time so said I was happy to run in together, but if he could do then push on. My main focus was beating the guys behind. Jim was happy to run in together so we kept the pace high around the final reservoir and down a cobbled hill...
Unfortunately just before the run around Penistone Hill Jim got a stitch and started to fade slightly. We were still ahead of the group though, and I decided we should finish together as long as there was a decent gap behind Jim. My line around Penistone Hill was better than last year (when I lost loads of places) and we were soon on the last run in, down through the churchyard and along a couple of little streets. Luckily there were passers-by to frantically ask "WHERE'S THE SCHOOL?!?!" and I could soon see the flags.
Then there was a small disaster, as Jim Rogers knew a little shortcut through a car park. It only got him 10 metres ahead of me, but he had caught up during the last run-in and managed to get ahead of me. With 20m to go there was no way I would get past him, I tried a shortcut across a flowerbed but was thwarted by a railing.
DAMN IT! Great race though... Duncan won, Jason second, Jim R third, me fourth, and Jim M fifth. 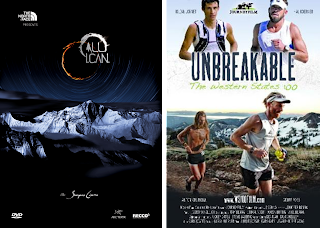 On a different subject, I went to see a couple of films at ShAFF on Sunday. First, the ski film All.I.Can., then Unbreakable, about the 2010 Western States 100 race. Both were brilliant... All.I.Can. is a "green" ski film, and as well as some fantastic photography it made some very interesting environmental points. Unbreakable  was truly inspirational. I won't give it away, but the race between four of the best Ultra runners in the world on one of the most famous courses is just incredible.