Not a great start...

January 09, 2012
Yesterday was the first Open5 this year, and the first in the south... We were on the Quantock hills in Somerset. This should have been good news for me as I had been here a few times before (Lorna's parents live there), but things didn't quite go to plan...

I was excited at the start, as it would be my first ride out on my new bike. I entered, sorted my gear out, and elected to ride first. It was a 2km uphill ride from registration to the start, but by just after 10 I was ready to go! I dibbed the start, was given my control description sheet and started to mark them onto my map. A few minutes later I had marked the bike controls and set off, the points were split 350 / 250 so I thought I'd spend maybe 3 hrs on the bike. I went straight along a good track to CP17, no worries, then carried on to CP19, where I had a nightmare and couldn't find it. After a while I decided not to waste any more time and carried on to CP20. From there on to 18, but half way down a rocky descent there was a loud Pfttttttttttth... An inch-long cut in the sidewall of my tyre! As the tyres are tubeless I thought I'd not taken a spare tube or pump (silly boy), so now had no choice. The long walk to transition took me an hour, although I did find CP19 on the way back! 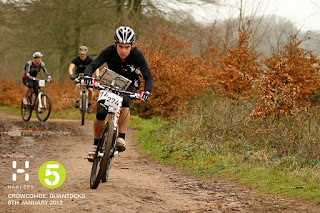 So I did a quick transition, and set off on the run, thinking I probably had time to clear it. However, it soon became clear that I had misplaced the control description sheet and pen during my bike-carrying (this was turning into an day to forget!), so I would be visiting ALL the controls on the map, even the ones that the didn't actually have any points. I was pretty frustrated by now and realised I would not be scoring highly, so just attacked the controls in order, working my way up the western side of the map, around and down the eastern side. Near the northern end of the area I met Matt and Rose, who (being a pair) had a spare control description sheet, so lent me their second one. After another navigational error meant I had to go down and up a big hill I turned around and made my way back towards the finish, not many controls to go now... But I was running out of time, and had to give up on CP37.

The icing on a thoroughly disappointing cake was that, despite my lowest score ever, I was a minute and a half late back so lost even more points! The only other Team Accelerate entry was Lucy, who showed how it's done and won the female solo category. To read a blog about how this adventure racing business is supposed to be done, see here.