December 04, 2011
I've been really busy for the last month or so, so haven't written anything on here. Apparently it's now nearly christmas, so here's a quick update on what's been going on (split over a couple of posts)!

The weekend after the Dark Peak Club Championships I was over in Staffordshire for the Roaches fell race. A 15 mile out-and-back race from Meerbrook Village hall, I was warned by regulars beforehand that the first (and therefore last) few fields were horribly boggy and slurry-ish. They weren't joking! Anyway, the race went quite well to begin with, and half way to the turnaround I was about 4th. The guy in front and I took a slight wrong turn and lost a couple of places, but then caught most of them back. However, it then all went a bit wrong... Coming down an off-camber descent in the woods I slid and tumbled over onto some gritstone rocks. These were like a cheesegrater on both knees, my right arm and left hand. To cut a long story short I lost a couple of places, got frustrated, consequently fell a couple more times, and finished the race in 11th, a bloody boggy knackered mess after losing a sprint finish with team mate Matt Hulley. We did at least win the team prize though, which was great.

After cleaning up and a few days' recovery, my legs looked like this: 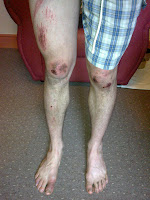 Straight after the Roaches race presentation, we had the Runfurther series presentation. This year we unfortunately didn't have a nighttime party event like we have in the past, but it was good to catch up with everyone, confirm my 10th place in the series and look forward to next year's races!

So, what has been going on to keep me so busy for a month? Training, PhD-ing and whatever else I do obviously, but also a new arrival into the family... 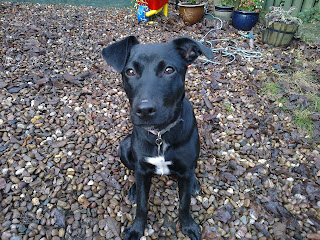 She's called Dolly and is a 6 month-old Labrador/Terrier/Whippet mixture dog-type creature... She's a rescue dog (from Rain Rescue in Rotherham), so we are still unsure of her past and certain things seem to scare her, but she will make a great training partner!