The weather for George and my second race together was again pretty interesting, no snow or ice this time but plenty of wind and rain. We made the decision to run first, which went reasonably well despite a couple of route choice errors (we need to plan further ahead, not just one or two controls at a time) which meant climbing when we didn't really need to, but we enjoyed the run.

Then onto the bike, we knew it would be hard so tried to split our time 2 hrs run / 3 hrs bike. Coming into transition the rain was getting worse, but we changed into our bike stuff and were pretty happy. Setting off north we made a mistake when we miss-read the map and thought we could take a shortcut. Both realising at the same time we said rude words in unison then turned around back into the wind. After this first bike control we set off to another one. We knew we should try to stay on the roads as much as possible to avoid very wet bridleways, but this one required some off road, which is where things started to go wrong. The wind was strong, we were going slowly / backwards and got very cold. At this point we stopped and decided to call it a day, and headed back to transition. Despite finishing the run after 2:15 and only getting one control on the bikes we were still out for 3:40!

I always feel rubbish if I finish a race before the end, and at the moment a bit like we have let ourselves down and should've carried on for 5 hours... Maybe we should've biked first, jumped off our bikes and ran to stay warm, gone a different way, or just been more manly, but there we go. Next time! (again)

On the plus side, the first outing for the new van was a great success!
Well done to everyone who survived! 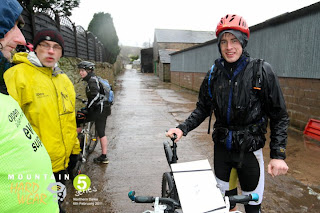